The pig, now named Banana, made himself right at home in the herd. 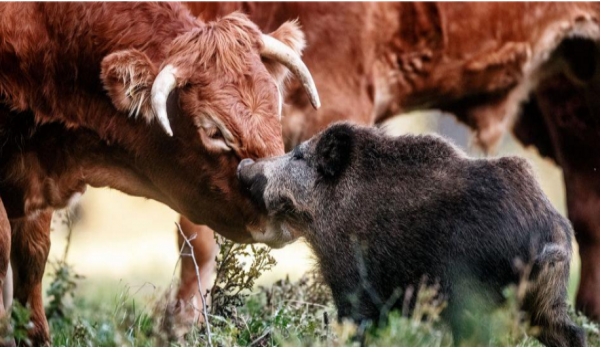 When German farmer Dirk Reese was taking his cows from the pasture to the farmyard at their home in MĂ¶rel (near Hamburg), he discovered a wild boar had made himself a part of the herd and even traveled with the group back to the farm,Â The Local reports.

The boar has integrated himself into the group and the eight cows donâ€™t seem to mind that heâ€™s there. Why? According to National Geographic, the wild boarâ€™s “intelligence and need for companionship may explain why it decided to join the herd.â€ť Lori Marino, executive director of the Kimmela Center for Animal Advocacy in Utah, told National Geographic that “In the wild they live in a social groupâ€”a male will be with several females, their babies, and immature males. And in captivity weâ€™ve seen time and again that housing them alone makes them very unhappy. When you put them together, they get the stimulation they need and just blossom… We donâ€™t know why this [boar] is alone, but clearly it left the forest and latched on to whomever it could find. Pigs are smart; this one knew what it was doing.â€ť

Cows are also intelligent creatures with great memories and are able to develop friendships and hold grudges, according to National Geographic.

Are there interspecies friendships on your farm?

This wild boar befriended a herd of cows in Germanyâ€”and become a celebrity: https://t.co/BTJWysFbm3