Urban farm founder Tchell DePaepe tells us all about the joys of super-potent wasabi and vibrant fuchsia amaranth microgreens. 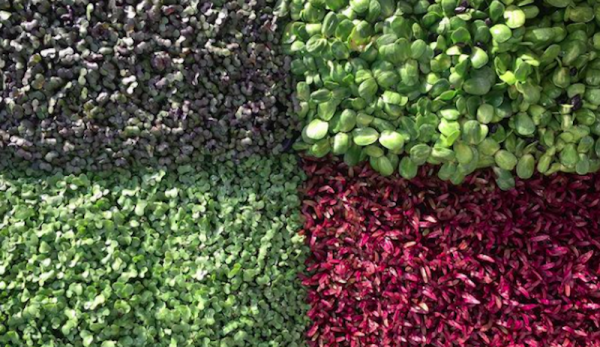 When Tchell DePaepe was 10 years old and living in a “tiny town” in Utah, she started growing pumpkins to sell to the local kids in the community. “That was my first entrepreneurship, you could say!” recalls DePaepe.

We spoke to DePaepe about her introduction to the world of microgreens and the challenges of farming in urban environments. We also got the scoop on her most potent tasting microgreens.

“At the time I wasn’t really familiar with microgreens,” admits DePaepe, looking back at the roots of Wild Dog Farms. “But the more I did research on them, the more I saw this was a great new opportunity and something I could do in a small space.”

DePaepe adds, “I’ve always enjoyed running my own business. So it was a perfect opportunity to do something that was really healthy and in a very urban place like West Oakland.”

Read more: Interested in growing microgreens? Here’s some advice from an advocate,

DePaepe has playfully tagged the vivid array of bijou produce she grows as “microgreen confetti.”

She spotlights amaranth as the most eye-catching of microgreens in her collection. “It’s almost a fuchsia color,” she says. “It doesn’t grow very tall. I use it in my rainbow mix, which also has purple cabbage and radish in it. Amaranth makes it very fun to look at. It’s a beautiful topping for a lot of chef dishes.”

Looking Beyond the Salad

When it comes to incorporating microgreens in cooking, DePaepe says that it’s important to look beyond the assumption to simply incorporate them into a salad.

“I’ve seen chefs put them on pork chops and in soups,” she explains. “Basically, you can top anything with microgreens. It’s kind of an education I have to give people. Like, it’s not just salads—it can be for tacos and burgers.

Read more: Want summer lettuce? Here are some tips for beating the heat.

Asked about the boldest tasting microgreens that Wild Dog Farms produces, DePaepe spotlights wasabi. “It’s very spicy. You can feel it right up your nose! Some people have told me it’s too spicy to use, but other people love it.

Looking back on naming Wild Dog Farms, DePaepe says that the silhouette of a canine featured in the company’s logo is actually a friend’s rescue named Rocko. “I just kept the name, and I thought it was wonderful,” she explains. “Everyone likes dogs.”