Wild fennel is available in most Italian markets. 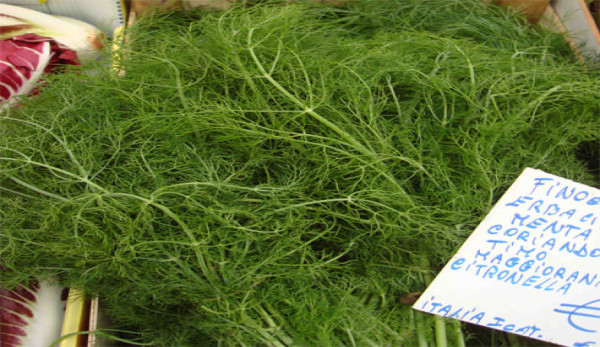 While wandering around the California foothills as a kid, I would often snack on wild fennel. My favorite part of the plant was the tender green shoots, but the seeds were also tasty, even the tough stems could be chewed satisfactorily, and the licorice taste from all parts of the plant made it essentially free candy for me.

These days, I see wild fennel shoots for sale in the vegetable markets here in Italy, and I have neighbors who sometimes come to our garden in search of wild fennel shoots for some dish theyāre cooking. Iām pretty sure folks in farmerās markets around in the U.S. are also offering fresh fennel with the other fresh herbs these days. The weed fennel is from the Mediterranean area, but by now itās made itself at home as a weed in a lot of states in the United States.

It is easy to confuse wild fennel with anise, because the umbelliferous flowers of the two close cousins are very similar, and both taste like licorice. But the leafy growth is obviously different, as the anise leaves are much more flattened than fennel leaves. Anise plants are generally smaller then fennel too.

At home, we use wild fennel shoots as a salad component, and as a seasoning for some pasta and baked vegetable dishes. My friends in Milan use fennel shoots in their risotto dishes. Sometimes I harvest the seeds from the plants in the fall, but Iām usually too lazy to do a good job with that work. I did harvest a nice big bag of seeds from the gigantic wild fennel we saw on our trip to Corsica a few years ago. Those plants were almost eight feet tall, as opposed to the 6-foot-tall plants we grow around here. In California, I remember the plants being even a bit shorter, probably because they seemed to grow best in the dry foothills, where water and nutrients are scarce.

I will admit that Iām not sure if the seeds used in making rye bread are from wild or cultivated fennel. I know that farmers here grow a lot of Florence Fennel and sell the thickened white stems as a vegetable, but I donāt know if there is a specific fennel crop grown for the seeds to make bread. Iām sure the seeds were originally from wild plants, but Iāll bet it is a cultivated crop by now. I used to put anise seeds in some meatballs, but I think that was because anise seeds are far more common than fennel seeds on the American spice rack.

Of course, people need to be aware that poison hemlock looks somewhat similar to wild fennel. If one is not confident of being able to distinguish between the two plants, wild plants could be very risky to eat. To me, the two plants are very different, as the hemlock has much larger and flatter leaves, and the flowers are white as opposed to the greenish yellow of fennel flowers. The dried seed heads are harder to distinguish, but the dried hemlock foliage tends to be brown and stay attached to the plant, while the fennel either stays green, turns yellow or just disappears. When hemlock leaves are squashed, they donāt smell like licorice like fennel leaves do.