Wild Lettuce: On Your Plate & In Your Medicine Cabinet

Wild lettuce—not to be confused with your dinner salad—can be a powerful natural pain reliever. 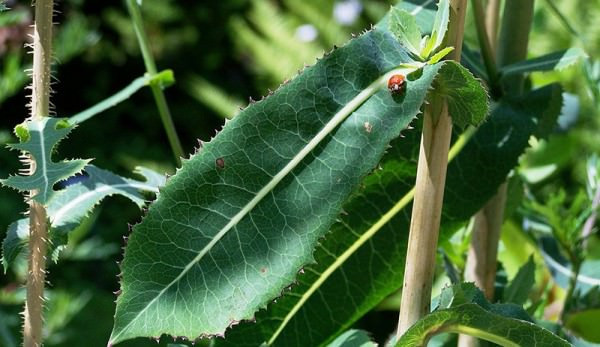 My son recently fell and broke his elbow running through our farm store. He’s 7 and fairly aware of his body for that age. He grasps the idea that pain is normal when you’ve broken a bone and that the pain will end once the swelling goes down. Pain management requires that sort of awareness. As toddlers, for example, we know we’re in pain but don’t often understand why it’s occurring. That situation leads to fear, which makes pain much worse.

The mental game involved with dealing with pain is only part of the story. In the hospital, after my son’s surgery, they gave us some pretty heavy narcotic pain medication. I used it at first but quickly moved to a formula of my own involving some of the best pain relievers we grow.

My No. 1 Pain Relieving Herb

The star of my pain relief tincture is wild lettuce (Lactuca virosa). This wild relative of our garden lettuce (Lactuca sativa) grows as far south as Georgia and in the West it stretches into Arkansas. It likes a bit of cold weather, so its growing region stretches north into Canada. It likes to grow in meadows and ditches in full sun, though we have some that adapts to shade here on our farm. The distinguishing mark for wild lettuce is its mohawk of fleshy spines that you can feel growing on the underside of the leaf’s midrib.

If you go looking for information on lettuce, you find that it has quite an interesting story. Lactuca is a genus in the sunflower family. The wild variants were used in ancient Rome and Greece, starting in 81 to 96 A.D. with Emperor Domitian, who began the tradition of eating a salad before meals. At that point, our modern L. sativa had not been developed, so the first course would have been much different than you are imagining. Domitian knew full well of the narcotic properties found in lettuce and used it to test his guests devotion, watching for who could remain awake throughout the following courses.

Over time, L. sativa was developed for modern agriculture, while wild versions remain around the world. Here in my own region we are blessed with an abundance of L. virosa. Both plants contain a bitter latex that leaks out whenever you break a stem or leaf. This milky juice is where all the action takes place, as it contains a weak narcotic. In early American folk medicine, the juice was collected and dried into a preparation called lactucarium. L. virosa has the highest amount of the narcotic, but L. sativa still contains a bit itself. In fact, savvy housewives once knew to allow their lettuce to bolt and would then harvest a mild pain reliever after enjoying all the salads the plant provided.

Wild lettuce has a history of use as a pain reliever and a sleep aide. It has been used for conditions like anxiety, arthritis and annoying coughs. I haven’t seen a lot of commercial preparations of wild lettuce, and I’m not sure why. It’s my favorite pain reliever, acting on the same level as an opiate without addiction or stomach damage. This past couple of weeks, I have been so grateful to know this plant. It has been helpful to relieve the pain of my son’s broken elbow and also to relieve the anxiety of two parents who had to watch their son head into the operating room alone.