Diseases that affect your Honey bees could also affect 11 other species of wild pollinators, a study finds. 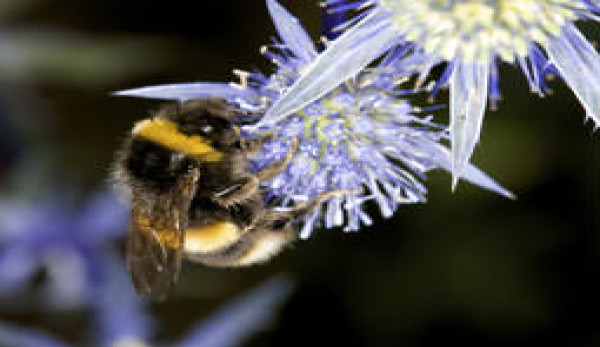 As if the concern of colony collapse disorder, a mysterious condition that devastates Honey bee colonies seemingly overnight, isnâ€™t worrisome enough to those of us who love our bees in the garden, there is evidence wild pollinators are susceptible to many of the same diseases as Honey bees when they share flowers.

In a December 2010 Penn State University study involving apiaries in Illinois, New York and Pennsylvania, researchers confirmed pathogens can be transmitted from Honey bees to wild pollinators when both use the same pollen source. The 11 wild pollinators studied, including the sweat bee and a bumble bee species, contracted all five of the viruses used in the study.

Researchers took samples of the studied species in proximity to hives that were infected with the viruses as well as ones that were not infected. The results demonstrated that the viruses can move from one species to another via pollen. What the study does not conclude is the overall impact and whether itâ€™s prevalent in an uncontrolled situation.

Buzz on Bumble Bees
Bumble bees are a particular concern for home gardeners because theyâ€™re well adapted to regional conditions. A separate study published in November 2010 from the University of Illinois notes a sharp decline in several North American bumble bee species.

Sydney Cameron, associate professor of entomology at the University of Illinois, headed the study that looked at eight species of North American bumble bees. Of the eight, four are doing very well while the other populations are struggling; however, the reasons for their decreased populations are not black and white.

During the study, researchers noticed the prevalence of the parasite Nosema bombi was higher in declining populations. But the question is whether the Nosema caused the decline or whether the loss of genetic diversity of a particular group made them more susceptible to it.

â€śItâ€™s too early to know if itâ€™s a general pattern that will affect other species,â€ť Cameron says.

Overall, the study shed light on alarming findings, but Cameron stresses itâ€™s not a reason to panic. From the potential transmission of pathogens between Honey bees and native species to the loss of habitat and use of pesticides, thereâ€™s no easy answer.

Bumble bees are critical because they can forage at much cooler temperatures than many other bees. Mader points out that theyâ€™re active in early spring when the blueberries and fruit trees are in bloom.

â€śThey might be the only efficient pollinators getting the job done,â€ť he says.

Bumble bees perform a uniquely important function called â€śbuzz pollination.â€ť A bumble bee grabs the flower and vibrates its entire body at the same frequency as the note of middle C on a tuning fork. This greatly improves production for tomatoes, eggplants and peppers.

Take Action
Although the findings from the Penn State study donâ€™t present immediate real-world applications, itâ€™s important to be kind to your native pollinators.

While home gardeners canâ€™t shield pollinators from infection or commercial chemical applications, they can do their part by creating a pollinator-friendly habitat.

Avoid pesticides by looking for alternatives to insect problems. Mader recommends utilizing crop rotation,Â resistant crops and floating row covers to act as a barrier between your plants and the bugs that love them.

He also says, â€śThink about how you can create undisturbed natural areas.â€ť Most bees nest in the ground (even in rodent burrows), while a handful prefer hollow stems of plants. Mader says a certain level of â€śbenign neglectâ€ť is beneficial to the pollinators.

Cameron suggests planting a mix ofÂ native flowers to provide a nectar source for emerging queens in the early spring and a steady food source for workers throughout the season.Â

â€śOne of the hardest times [for wild pollinators] is around August because the flowers are fading,â€ť Cameron says. She recommends planting varieties that bloom until frost and maybe beyond. She also strongly encourages home gardeners to talk to their local nurseries about carrying regionally specific wildflowers.

Although reports of disease transmission from Honey bees to wild pollinators and declining populations of some species are alarming, itâ€™s important to remember to focus on what you can do in your own backyard to lessen the pollinatorsâ€™ plight.