Texas farmers and ranchers see more than $20 million in losses to agricultural infrastructure and land because of April wildfires. 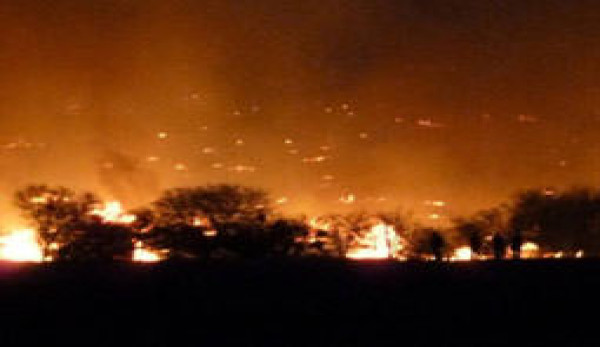 Texas wildfires during April have caused an estimated $20.4 million in agricultural losses, destroying fences, buildings and grazing pastures and resulting in livestock deaths, according to the Texas AgriLife Extension Service.

â€śThese estimates are preliminary since not all the damages have been reported yet for all fires,â€ť says David Anderson, PhD, AgriLife Extension economist in College Station, Texas.

The preliminary financial-loss estimates do not include forestry. By contrast, wildfires during another fire-ravaged year, 2009, caused about $35 million in agricultural losses in March and April. Fewer acres burned that year, but those fires destroyed more fences, driving up replacement costs.

The damage estimates to ranch and industry infrastructure so far for 2011 represent the largest portion of fire costs, Anderson says, which includes fences and agricultural buildings such as barns, livestock holding facilities and other structures.

Itâ€™s estimated that approximately 1,200 miles of fence have been destroyed, and a recent AgriLife Extension report indicates four- to six-wire fences with steel posts cost an average $10,000 per mile to build. Fencing can be more expensive depending on the location and the terrain, Anderson says.

â€śFencing in a livestock operation is one of the primary necessities and is one of the most costly expenditures in ranching,â€ť he says.

Meanwhile, the amount of grazing land that has been lost to Texas’ wildfires has also been a financial hardship on Texas ranching operations.

â€śLost grazing for the year is the second-largest financial loss category,â€ť Anderson says.Â  â€śMore than 2 million acres have burned during this fire season. This, coupled with the lack ofÂ hay andÂ grazing availability, is forcing many cattle to be taken to market.â€ť

LivestockÂ losses are estimated using market values, he says. Livestock losses are expected to be underestimated due to later death loss from injuries incurred from the fires.

So far, financial-loss totals are still being calculated, Anderson says. These estimates also donâ€™t include additional costs from moving livestock and securing other property to graze.

More than 500 cattle,Â horses andÂ sheep have been reported dead as a result of this springâ€™s fires, he adds.

â€śThese raging wildfires are catastrophic in nature, destroying homes, killing livestock and devastating the livelihoods of farmers and ranchers who dedicate their lives to supplying us with food, clothing and other essential daily needs,â€ť says Texas agriculture commissioner Todd Staples.

Staples is calling on Texans to lend a helping hand by making a donation to the State of Texas Agriculture Relief Fund. To assist farmers or ranchers who have suffered losses from the wildfires, monetary donations can be made to the fund by visiting the Texas Department of Agriculture website.