Beware the Poisonous Variety in These 3 Similar Wildflowers

Queen Anne's lace and yarrow have many useful qualities, but they look a lot like poison hemlock. Here's how to tell these wildflowers apart. 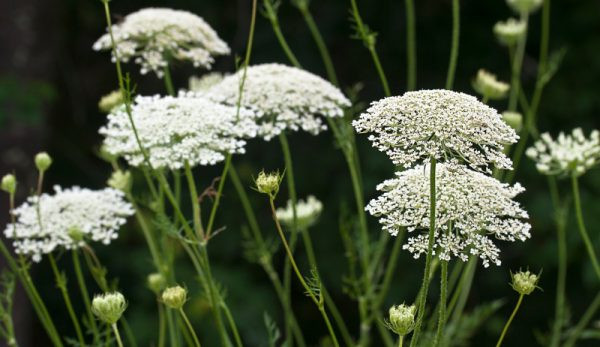 As we move into summer, plenty on the landscape can capture your interest and imagination. On our farm in Central Kentucky, we can see the start of blackberries and the beginning blooms of wildflowers. This time of year, I get excited about foraging from the landâ€”nature provides plenty without having to tend a gardenâ€”and I like to teach people to be aware of three wildflowers in particular. Each has a white, umbel blossom that looks much like the others, and while two of them can be eaten or used medicinally, one is extremely poisonous.

Queen Anne’s lace (pictured above) is one of the first flowers I learned to identify as a child. Iâ€™ve always remembered it thanks to the the legend surrounding one of its identifying features. As the legend goes, Queen Anne was sewing a piece of lace, when she pricked her finger, and a drop of blood fell in the center. Thus, a good way to tell Queen Anneâ€™s lace wildflowers from the others on this list is to look for a small purple flower in the center of the umbelâ€”the drop of blood.

Queen Anneâ€™s lace grows to be about 2 to 4 feet tall. It has finely dissected leaves, white umbel blossoms that emerge in a flat cluster and hairy stems. (Think: â€śQueen Anne has hairy legs.â€ť) Flowers emerge April through October. You’ll find them in disturbed areas such as roadsides.

Queen Anneâ€™s lace is also known as wild carrot, and, as you might suspect, it belongs to the carrot family. In fact, the root is a favorite wild food among foragers, and you can et it just as you would a carrot. As the plant is a biennial, though, harvest roots only in the first year. Second-year roots can be woody. The rest of the plant is edible, as well. Throw the flowers in a tea or use them to flavor pickles. Chop up the greens for a stir-fry or salad. You can use the seeds in tea as a diuretic or to relieve gas. You can also use them as a seasoning, similar in flavor to caraway. However, avoid using the seeds if you’re pregnant, as they have a history of use as a contraceptive.

Yarrow and Queen Anneâ€™s lace can be easily mistaken for one another. The two wildflowers grow about the same height, in the same areas, at about the same time of year. Yarrow grows about 1 to 3 feet tall and can be found in disturbed areas. It also produces a white (and, on rare occasions, pink) umbel flower head. The blossoms appear to me to be a little more hardy than that of Queen Anneâ€™s lace, which looks more loose and lacy. Yarrow also has finely dissected leaves, but with a more feather-like appearance. Youâ€™ll see its flowers popping out between May and October.

Yarrow is best known as a wound-healerâ€”you can literally pluck the flowers out of the field, give them a little chew to macerate them, then stick them on a bleeding wound to make the blood flow stop. Legend goes that during the Civil War, people used these wildflowers as a poultice to stop the bleeding of wounded soldiers.

You can also use the aerial parts (flowers, stem and leaves) internallyâ€”dried, fresh or tincturedâ€”in a number of ways. Yarrow can help regulate menstrual cycles in women. In combination with other herbs, it can treat colds and flu. It also helps treat hay fever, high blood pressure and circulation issues.

Of the wildflowers on this list, properly identifying this one is most important because the name doesnâ€™t lieâ€”eating it can be fatal. Unfortunately, as a member of the carrot family, it looks like many other edible plants, including Queen Anneâ€™s lace, cultivated carrots and parsley. In fact, a farmer friend told me of a friend who raved about â€śparsleyâ€ť that â€śsuddenly appearedâ€ť in her garden that sheâ€™d been nibbling. Knowing that parsley doesnâ€™t have a tendency to â€śsuddenly appearâ€ť where it wasnâ€™t planted, my farmer friend asked whether she could see it. Turns out it wasnâ€™t parsley at all, but poison hemlock. Thankfully, the person and her family hadnâ€™t fallen sick from the bits theyâ€™d ingested, but this is a perfect illustration of the need to follow the golden rule of foraging: If you canâ€™t definitively identify the plant, donâ€™t eat it.

Poison hemlock can grow between 2 and 6 feet tall. It has hollow, grooved stem, nearly as thick as an index finger, with distinctive purple spots. The leaves have a finely dissected appearance typical of those in the carrot family, though the general shape is that of an equilateral triangle. Like Queen Anneâ€™s lace and yarrow, it has white umbel flowers. However, the stalk is highly branched, so youâ€™ll see more umbels per plant on poison hemlock than you will on the other two species mentioned here. Like the other two plants, though, it grows in disturbed areasâ€”I often see it in our area along creek beds or in old cattle grazing areas.

I cannot overemphasize: This plant is extremely poisonous. Merely touching the poison hemlock can cause dermatitis. If taken internally, its toxic alkaloids can affect the nervous or respiratory systems. Even small amounts can result in death. If you find poison hemlock growing in an area where pets or children roam, remove it promptly and carefully. Wear long sleeves, pants and gloves. Dispose of the plant in plastic garbage bags, and do not let the plant touch your skin. Be sure to clean off any tools, such as clippers, you use so that you don’t inadvertently come in contact with the toxic juices. For more on poison hemlock control, visit the website of the University of Californiaâ€™s Integrated Pest Management Program.

Foraging this time of year can be fun, but some plant look-alikes make it tricky. As you observe what growsin your area, find a guide book and learn more about what you see or, better yet, follow an experienced forager. Again, never eat something if you can’t identify it with 100 percent certainty.