Relocating the mountain goats helps to replenish their numbers. 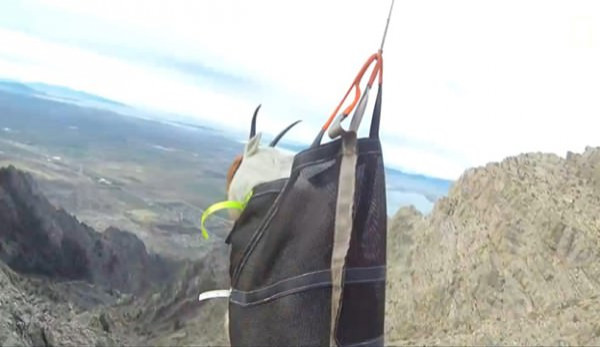 If youâ€™ve ever been in the mountains in Utah and seen a goat or two hanging from a helicopter overhead and wondered what the heck that was all about, hereâ€™s your answer: The Utah Division of Wildlife Resources relocates its scattered populations of mountain goats to various areas to keep the populations controlled.

How is it done? Wildlife officials fly over the mountains in search of the goats. When they see them, they use whatÂ National Geographic says are called “pneumatic net gunsâ€ť to “entangle the goats, allowing biologists to land nearby and then prepare the goats for flight … The scientists first restrain the animals in snugly fitting bags and blindfold them, a method that calms the animals and eliminates the need for tranquilizers.â€ť After that the goats are looked at by a veterinarian and radio collars are attached, which then send data to the Utah Division of Wildlife Resources regarding the goatsâ€™ health. The mountain goats are then transported and released in their new areaâ€”which is often at least 250 miles from their original location.

What do you think of this strategy to prevent under- and overpopulation of mountain goats?