Will My Dog And Chickens Get Along?

For your pooch and flock to live together in harmony, you need to know your dog and it’s boundaries. 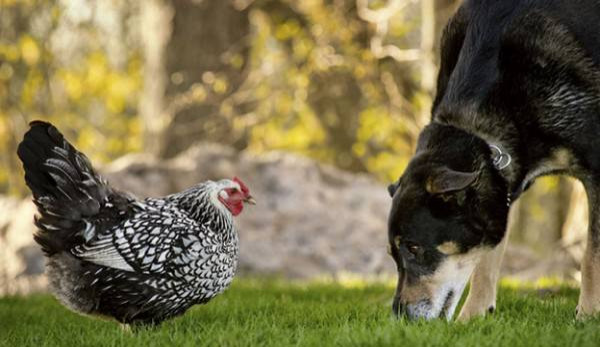 Chickens and dogs might not seem like the most compatible species, but with an early start, some good training and a watchful eye, many dogs can live harmoniously with a flock of chickens. More so, keeping a chicken-friendly dog nearby can ward off a number of unpleasant predators while fulfilling a canine’s need for a job.

Can dogs really be trusted around chickens? You’ve likely heard some disaster stories: traumatic events that ended in a bloodbath with dead chickens and Fido to blame. Others swear by their pooch’s loyalty, and you’ve no doubt seen photos circulating the Internet of placid, sleeping canines with fluffy chicks happily perched all over them.

For chickens and dogs to coexist in reality, there are no hard and fast rules. The real answer is that every dog is different.

Chicken breeds, while they vary widely in color, shape and personality, are relatively uniform when it comes to temperament: They are creatures of prey and don’t want to be eaten, so they’ll do everything they can to avoid that fate. As such, they’re quite predictable in terms of how they will react around most predator animals (dogs included).

On the other hand, the personality and temperament (not to mention size) of many dog breeds, in combination with a dog’s individual personality, can vary so dramatically that only you will be able to determine if your pup can be trusted around your chickens. To help you get started, let’s take a look at some of the different factors that contribute to a dog’s trustworthiness around prey animals.

Before you can move toward any conclusions about your dog’s behavior (or potential behavior), know its breed. If it’s a mix you adopted from the shelter (good for you!), then make your best guess. If you’re completely stumped, consult a canine trainer or dog expert for advice.

Knowing your dog’s dominant breed and the general traits of that breed will tell you a lot about what to expect of your dog around smaller animals. Read about the breed and what purposes or tasks it was developed for. Was your dog’s breed cultivated for herding (such as a Border Collie), hunting (Golden Retriever) or companionship (Shih Tzu)? These are very important clues to a dog’s underlying temperament and will help inform whether your dog will get along with your chickens.

Some breeds, such as Greyhounds, have high prey drives. Prey drive is the tendency or inclination to attack or pursue, and sometimes kill, smaller animals perceived as prey. Prey drive is not the same thing as aggression. Some breeds have a lower or higher prey drive depending on what they were bred to do. It’s possible to train a dog around its naturally inclined prey drive, but this takes time, commitment and, above all, consistency.

Even a passive, unassuming breed can still pose a threat to your chickens if its personality is aggressive or overly playful. My 90-pound retriever mix would never intentionally harm one of our birds, but she’s playful, large and doesn’t know her own strength. She could easily pounce on a chicken and inflict a fatal wound.

On the other end of the spectrum, one of my two chihuahuas seems to believe that everything (and everyone) exists to play with her. She likes to chase the birds around in fun, but they find it rather annoying. They sometimes chase her back but simply aren’t fast enough to catch her. She doesn’t pose a threat to the chickens (if you don’t count sheer annoyance), but her behavior under other circumstances could stress certain birds, separate chicks from hens or make flock members feel generally unsafe. In this example, a breed developed for companionship, such as my chihuahua, is overshadowed by the dog’s personality (high energy, very playful and occasionally focused on the chickens).

Of course, each dog, regardless of breed, is different. Some dogs simply defy their breed; their personalities just don’t match what their breed says they should be like. This is where it’s up to you to know your dog and watch its behavior around chickens.

Once you’ve determined your dog’s breed, know its personality and think its ready to coexist with chickens, it’s time to start introductions. If you’ve recently added a puppy to your household and already own chickens, introduce them right away (as in, while your dog is still a puppy). If you already have a dog and are considering getting chickens, you may want to test your dog’s prey drive and general reactions by introducing him to other birds before getting chickens. The following method is roughly the same for both scenarios.

The safest option is to start with the least amount of exposure and work up to direct contact. Keeping a distance, walk your dog or puppy on a leash around the chicken yard, coop, run or enclosure. Watch to see how your dog reacts when it spots the birds. Do its ears perk up? Do its eyes lock onto the birds and become fixated, or does it glance their way, sniff the air and then move on to other smells? Read your dog’s body language as you walk around.

If your dog shows signs of wanting to chase the birds (barking, growling, tugging at the leash, all while keeping eyes on the birds), call it quits and try again another time. A dog that is this aggressively interested in chickens may warrant some professional training to become acquainted and trustworthy around a flock. If the dog is interested, but not aggressively so (watching, sniffing the air but generally moving about), move closer to the flock. Let your dog sniff the birds and the ground near and around the enclosure. The nose is the information gatherer of a dog’s senses so let your pup sniff for as long as it wants.

Continue to introduce the dogs and chickens in this manner—with you present at all times—as you gradually eliminate barriers between the two species. This process may take days or weeks (or more).

Be patient with the process, and take your time. Continue to read your dog’s body language, and follow its cues.

Can’t We All Just Get Along?

Some dogs might never be trustworthy around chickens. This can be an unfortunate reality that you will have to reconcile as a dog owner and/or chicken owner. If you have a dog that continually shows aggression, extreme herding behavior or relentless chasing, it’s likely this dog’s prey drive is very high and cannot be trusted loose around a flock of chickens. While not ideal for you, this isn’t the dog’s fault; it’s instinctual and simply its nature. In a case such as this, it’s your responsibility to keep both species safe.

First and foremost, train your dog to listen to your basic cues, and keep it on leash at all times around the flock. House your chickens in a predator-safe coop, and lock them up each night. Watch diligently if your dog and chickens are ever in the same area together, and if you can’t be there to monitor interactions, keep them separate. If you are unable to take these steps, it would be wise not to keep dogs and chickens together.

Some people believe that with enough time, effort and diligent training, any dog of any breed can learn to live peacefully with chickens. Whether your dog requires daily obedience training or naturally has a nonchalant attitude around fowl, learn some basic cues and practice these with your dog regularly. Contact your dog’s national breed club for qualified local dog trainers who specialize in that breed.

Although it might be entertaining to watch, don’t encourage play between your dogs and birds; play can be a precursor to more aggressive behavior.

Above all, use your best judgment. Read your dog’s body language, and know him well enough to determine which precautionary steps you need to take to keep your chickens and your dogs safe.

Get more on keeping farm dogs from HobbyFarms.com: