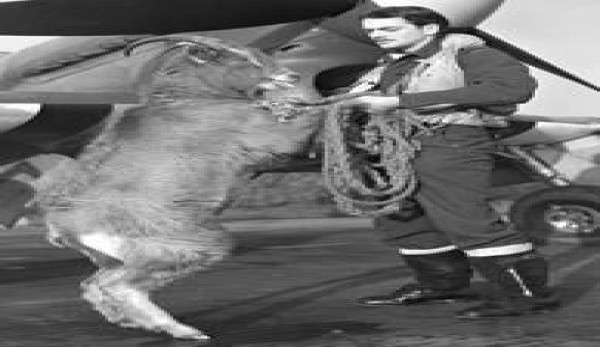 William, a British Toggenburg, a British breed related to regular Toggenburg goats yet slightly bigger, joined the Royal Air Force in July 1941, when he was given to Belgian pilot Vicki Ortmans by the landlady of a pub near the Biggin Hill airbase outside of London. Although just a kid at the time, he was immediately commissioned with the rank of Flying Officer. William remained with his squadron until its disbandment in 1945, when he retired in England with the lofty rank of Air Commodore.

William’s squadron included airmen from Great Britain, the United States, Canada, Australia, New Zealand, Belgium and Poland. On some days the squadron flew up to 150 missions. During the war, 73 of William’s boys were killed in action, including Ortmans, who bottle-raised baby William.

William flew with the squadron on several occasions, including across the English Channel, where he disembarked in Normandy and subsequently served at 12 different airbases in France, Holland and Germany.

During his two years with the British 609 (West Riding) Squadron, William sniffed oxygen bottles and consumed innumerable cigarettes along with top secret maps, files and records. William was shot at but never hit. He did, however, bloat badly after pigging out on mattress stuffing, and he almost died of slow poisoning. That happened because as William rose through the ranks, his boys used blue “aircraft dope” to paint bars denoting his rank on his horns. William, who liked the taste of the paint, would swipe his horns across his front legs and lick the paint off. Just prior to deployment to Europe, he became deathly ill. That’s when the airbase’s medical officer determined that the blue paint on William’s horns was toxic. After that William’s horns remained unadorned.

In 1944, William attained the rank of Group Captain, making him the highest ranking officer in the squadron. Even the unit’s commanding officer, Squadron Leader J.C. Wells, saluted him before taking off for operations. His boys loved William and believed his presence brought them luck.

William wrote a book about his wartime experiences with the help of his friend, Squadron Leader Brian Waite, RAF. It’s called William de Goat: The Story of Air Commodore William de Goat DSO DFC, the extraordinary Mascot of 609 (West Riding) Squadron during the Second World War. It’s a British book by you can buy it at Amazon if you like. Check it out. I bet you’ll be glad you did.