Win Over Native Bees with These 5 Hospitality Secrets

We sure hope native bees aren’t going anywhere, but without some TLC (and possibly some swooning), they’re likely to take their bee bodies elsewhere. 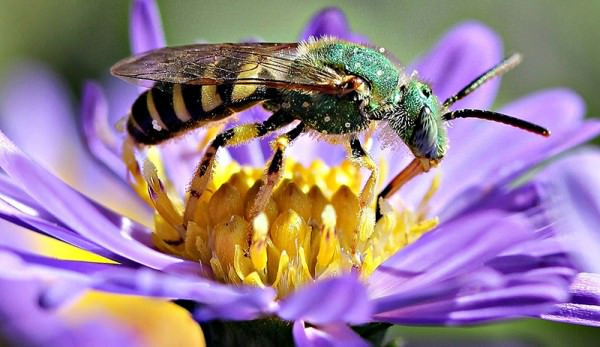 And unless you’ve been sleeping under a rock, you know about the dramatic decline in European Honey bee populations due to parasites, pesticide exposure and colony collapse disorder. All the perils besieging this introduced pollinator are making it increasingly more difficult for farmers to maximize their lands. Cranberry, squash and pumpkin growers, citrus groves, apple orchards, and farms of all shapes and sizes are struggling to maximize their pollination efforts. Because European Honey bees are social insects that live in large colonies, they’re often introduced to farms during peak bloom times to aid in pollination, but their social ways also make them more vulnerable to contagions.What if all the bees were gone? Well, the truth is, our bellies would be growling. The value of pollinators is undeniable. Each year, more than $20 billion of food crops make their ways into North American kitchens because of creatures much smaller than the cap on your water bottle. That’s a lot of weight on those tiny shoulders.

With honey bee numbers in decline and pollination at risk, it’s important to support native bee populations in order to keep pollination in motion. There are many steps you can take to encourage bees to visit your farm and take up permanent residence. Here are just a few.

1. Build bee-cozy hideaways.
You’re farmland is full of nooks and crannies where native bees would like to lay their heads at night. Look to preserve undisturbed areas and field edges that can serve as both nectar and habitat sources. Plant these areas with nectar-rich native plants, and leave those rock piles, old rodent burrows, heaps of brush, snags, hollow-stemmed plants and bare ground—while disheveled to the eye, all serve as possible nesting sites and should be protected.

Nearly 70 percent of native bees nest in the ground while most of the remaining species nest in woody tunnels. Natural areas less than 1/2 mile from fields have the highest numbers and broadest diversity of native bees.

“Fence lines, field edges and buffers, roadside areas, and wet areas where you can’t grow crops are all places that can provide pollen and nesting sites,” says Mace Vaughan, pollination program director for The Xerces Society for Invertebrate Conservation. “If you are practicing crop rotation and using cover crops, even though they aren’t permanent habitat areas, they can be designed to provide flushes of flowers that can be very beneficial.”

Pasture areas can be planted with forage legumes and rotationally grazed to allow the plants to come into flower. Even the forest can provide important resources. “Basswood, tulip poplar, willow, cherries and many other trees are important resources,” Vaughan adds.

2. Give them breathing room—literally.
Any efforts to convert to more natural pest-management practices will aid native bee populations. Ken Mandley, owner of Deedon Lake Natural Orchard in Turtle Lake, Wis., grows apples on 10 acres. His orchard is certified organic, and while most of his farming practices are not specifically targeted at supporting native pollinators, his overall approach is one that supports a broad range of insect life.

“I am careful about the time of day I apply allowed materials like sulfur,” he says. “Bees tend not to fly early in the morning so that is my preferred time of application.”

Mandley avoids cover sprays and relies on extensive pest trapping. He also mows alternating rows during most of the summer to allow for increased bee habitat and forage in his orchard.

3. Respect the “Do Not Disturb” sign.
Tillage practices can disturb the nests native bees create by excavating a single tunnel or a series of tunnels in bare or sparsely vegetated soil. Because a significant number of native bee species nest in the ground, no-till practices have a positive impact on their numbers.

“A study in Virginia looked at pumpkin and winter squash pollination,” Vaughan says. “These crops are pollinated by a large, solitary bee called the squash bee. These bees nest in the ground right next to the plants that they pollinate. What they found was that where no-till farming practices were in place, there were three times the number of pollinating squash bees. The USDA took a survey, and they found that more than 80 percent of squash pollination is performed by this species of bee.”

If you don’t want to switch to no-till practices, allow areas with plenty of exposed soil to remain undisturbed, and don’t cover every strip of bare ground with mulch, especially south-facing slopes where certain bees prefer to nest. In addition to squash bees, ground-nesting species include bumblebees, polyester bees, mining bees, digger bees and alkali bees. (Decidedly not included here are the many species of ground-nesting wasps that are capable of stinging and need not be encouraged!)

Early-emerging, ground-nesting bee species are of particular value to orchardists because fruit trees are among the earliest bloomers. “If you till your orchard, you are destroying their burrows and eliminating a terrific pollination resource,” Vaughan says.

Vaughan suggests seeking both educational and financial support whenever possible.

“It is worth reaching out to a local branch of the USDA or the Natural Resources Conservation Service. There is potential financial assistance available, especially to organic farmers or those transitioning to organic management,” he says. “But I think when it comes down to the nuts and bolts of getting habitat on the ground, we need to look at how much time and energy you can dedicate to it. A lot of folks explore installing a hedgerow first. If you are tired of mowing a field edge, think about installing a permanent hedgerow that, outside of some initial weeding, doesn’t require much maintenance. It’s a straightforward way to create habitat.”

4. Buy them dinner—they love buffets!
If you want to step habitat creation up a notch, Vaughan suggests offering them a feast of wildflowers, fruit and vegetable crops, and cover crops.

“Choose a corner next to the barn or near the woods or a ditch that you can’t grow in, and plant some wildflowers that are known to be good bee forage. Prepare the site, control the weeds and select the right seed mix,” he says. Buzz-worthy blooms include bee balm, California poppy, goldenrod, milkweed, purple coneflower, wild buckwheat and wild lupine.

Use native plants with successive bloom times, varied flower shapes and diverse coloration. The Xerces Society has been working with the native-seed industry and seed suppliers to develop seed mixtures specifically tailored to pollinators. You can find Xerces-approved seed blends listed on their website.

“Another way to create new pollinator habitat is to increase your farm’s crop diversity,” Vaughan says. “Increase the number of varieties you grow. The goal in conserving bees of all types is to make sure they have food available to them through the whole season and the crop itself can be part of that. If you grow a wide variety of crops, that can be part of the solution.”

Tree fruit, raspberries, peppers, strawberries and a diversity of crops provide a season-long wave of blooms and a lot of nectar. Plus, you’ll extend your production and have more produce to take to market.

Cover crops also play a role in providing bee forage. Interplant crops with an occasional row of lacy phacelia, clover, vetch or buckwheat, and during the off season, use cover crops not only to conserve soil and as green manure but also to provide food and habitat for native bees.

“Creating an artificial place for ground-nesting species to live is tricky because they need the right soil type, the right amount of moisture and the right sun exposure, so there are a lot of things outside of a farmer’s control. It can be difficult to manage. In most cases, it’s best to let those bees find the sites that are best for them rather than trying to artificially create a site.”

However, creating nesting sites for the 1,200 species of tunnel-nesting bees is significantly easier. You can purchase or build nesting tubes, tunnels and blocks for these bees or plant plenty of hollow-stemmed plants, such as elderberries, box elders, Joe-Pye weed, teasels, brambles, cup plant and bee balm, for them to naturally nest. The stems of these plants can also be fashioned into artificial nesting sites for tunnel-nesters, including mason and leafcutter bees. Cut the plant stalks into 6- to 8-inch lengths and bundle them in groups of 20 or more. Fasten the bundle with twine or wire, or nestle them into a bucket, an empty can, a section of PVC pipe or even a paper milk carton. Orient the stems horizontally to protect the openings from rain.

Homemade or commercially purchased wooden nesting blocks or stem bundles should be placed in a sheltered site where they’ll receive morning sun. They can be any height from the ground and should be mounted securely to a building, tree, fence or other structure. They can be left in place year-round but should be replaced every few years. The foraging reach of native bees ranges from 50 feet to 1/2 mile, depending on the species, and research conducted across North America continues to hammer home the importance of these small but important pollinators.

More than 100 native bees have been documented in apple orchards in my home state of Pennsylvania, and more than 60 species of native bees were found on a single farm in California, busily pollinating watermelons and tomatoes. “Protect and promote them as best as you can because, in reality, they are making money for you,” Vaughan says. “Farmers everywhere need to take notice and see how important these insects really are.”

This article originally appeared as part of “Pollinator Central” in the July/August 2013 issue of Hobby Farms.