Winter Moths: A Pest Worth Watching

Winter moths are a common pest in much of New England and parts of the Pacific Northwest. Learn how to ID this insect and limit its feeding damage. 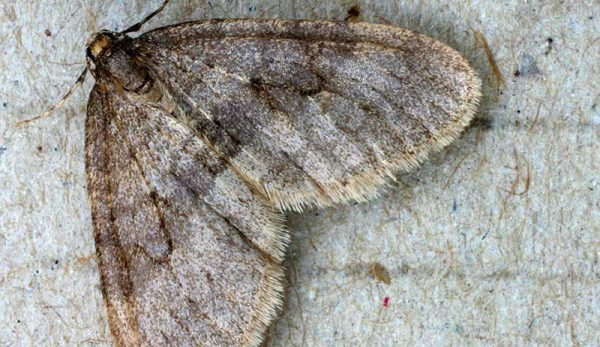 If you live in New England, eastern Canada or the Pacific Northwest, you might already be familiar with a serious plant pest known as winter moths. If you aren’t familiar with this damaging insect, you might be soon. There’s a good chance its range will spread over the coming years and cause more problems for farmers and gardeners.

What Are Winter Moths?

Winter moths are a native insect of Europe and parts of Asia. They were first noticed in Nova Scotia and other regions of Canada in the 1930s and were first recognized in Massachusetts in the early 2000s. Since then, they’ve become very common in New England and the Pacific Northwest.

The male adult moths are brown and fairly nondescript. Their wingspan measures slightly larger than three-quarters of an inch. Because the adults are active during the late fall and early winter, you’ll often see the male moths flying around porch lights at night, as long as the temperatures remain above freezing.

The females, on the other hand, are even smaller. At just a quarter inch long, the female moths are gray and have almost nonexistent wings, making them flightless. Around Thanksgiving time, breeding season begins when the females crawl up a tree trunk and emit a pheromone to call in the males.

Soon after mating, the female lays eggs in the tree bark, where the eggs will stay all winter. In early spring, the eggs hatch into small caterpillars.

What Do Winter Moths Feed On?

Male and female adult winter moths do not feed at all, but the caterpillars can be quite destructive. Soon after hatching, the caterpillars crawl up the tree trunks and burrow into bud scales to feed on them. Common hosts include blueberry, cherry, apple, oak and maple. Damaged leaves might be full of tiny shot-holes, though the caterpillars often also feed on flower buds, too.

Winter moths are unusual in that they’re one of just a few species of moths whose adults are active during the winter months. When the caterpillars are young, they sometimes produce a silken “parachute” they use to float on the wind to other host plants.

Just before pupation, the caterpillars can grow to be an inch long. Though they’re black when young, mature caterpillars are light green with a long white stripe down both sides of their body. When they’re ready, they drop to the ground and pupate under the soil. This often occurs in late spring or early summer. They then remain under the ground until they emerge as an adult in late fall or early winter to create the next generation.

In regions where winter moths are prevalent, dormant oil sprays in the very late winter can effectively smother the eggs, but ensure they’re applied at the right temperatures.

Once the caterpillars emerge in spring and begin to feed, organic spinsoad-based pesticides and those based on Bacillus thuringiensis (Bt) are even more effective. Follow label directions carefully and apply only to target plants, as these products will kill any species of caterpillars feeding on the plants.

In some regions where winter moth is an active pest, biological control has been implemented and has been very effective. A species of tachinid fly (Cyzenis albicans) lays its eggs on host trees, so that when the winter moth caterpillars feed on the leaves, they also consume the fly eggs. The fly larva then hatches within the caterpillar’s body and consumes it from the inside out.