Photo by Judith Hausman I combined tart cranberries, oranges and golden raisins under a pretty lattice to make this cold-weather fruit pie. No, I didn’t make cherry pie for Presidents’ Day. I do adore cherries, but the only way I could have used them is if they came from very far away or if they […] 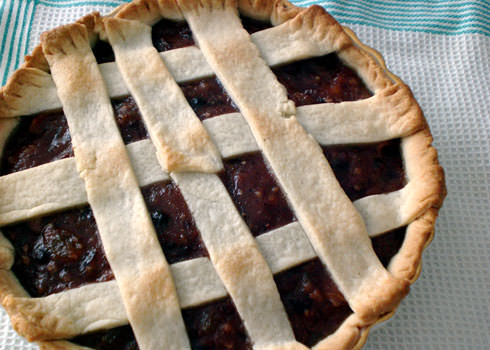 I combined tart cranberries, oranges and golden raisins under a pretty lattice to make this cold-weather fruit pie.

No, I didn’t make cherry pie for Presidents’ Day. I do adore cherries, but the only way I could have used them is if they came from very far away or if they were canned or frozen (not enough in my own freezer from last summer).

Avoid the pie crust challenge like I do. Instead of filling a pie crust with fruit, cut rectangles of frozen puff pastry sheets to make turnovers. Or use your favorite biscuit recipe to turn the fruit mixes into a cobbler. Fill a casserole with either fruit mix, leave it in the oven until bubbling hot; then remove and quickly blop on the dough and return the dish to the oven until the biscuits have browned. Even stale cookies or dry breakfast cereal easily can be turned to crumbs in a food processor and subbed in to a graham cracker crust recipe.

However, there are pies I like to make in winter, even though I’ve never thoroughly mastered pie crust. Nut pies, of course, like maple walnut pie or pecan pie are winter holiday pies. Chocolate pie is season-less and a crowd-pleaser, whether it’s filled with elegant ganache or homey chocolate pudding. (Homemade chocolate pudding is amazing, in fact.) A rich butter crust made with added ground nuts, spread with summer fruit jam and then topped with a pretty lattice sparkles like a jewel.

Lemon meringue pie or Key lime pie could be considered seasonal (Meyer lemons and local eggs for the meringue or chiffon), though their flavors seem summery and light to me. Don’t forget that long-keeping sweet potatoes and winter squash are still around. They make wonderful pies with traditional pumpkin pie spices or with darker, southern flavors like molasses.

I update season-neutral buttermilk pie nicely with flaked, unsweetened coconut, a teaspoon of ground ginger and the grated peel of a lemon. If you make a graham cracker crust, you can add spices or coconut to the crust, as well.

While the ingredients are not local, here are two more pies I can make before the fresh spring rhubarb pokes up again and after the local apples get too soft or wrinkly. Reminiscent of mincemeat but without the suet or green tomatoes, I offer two versions of dried-fruit pies.


Preheat oven to 425 degrees F. In a saucepan, cook cranberries, raisins and water/cider about two minutes or until the cranberries pop. If using the canned sauce, simmer the mix until thick and reduced. Remove from heat, and stir in the butter immediately so it melts. Add remaining ingredients, mixing well.

Pour mixture into a prepared pie shell. Top with a second crust. Bake at 425 degrees F for 10 minutes; then reduce the heat to 375 degrees F and bake for an additional 20 to 30 minutes.


Preheat the oven to 375 degrees F. Cook the fruit in the cider until the liquid is absorbed. Cool slightly, and mix in butter, sugar, spices and walnuts. Pour mixture into a prepared pie shell. If desired, cut the second crust into strips and weave a lattice for the top, or leave the pie open-faced. Bake for about 40 minutes.