Photo by Rick Gush The cascading purple wisteria reigns here in Italy. It’s full-blown spring now in Italy, and things are blooming like crazy. I helped my friend use a weed eater on his olive groves this week, and though I cut down a lot of grass, I mostly mowed down fields of full blooming […] 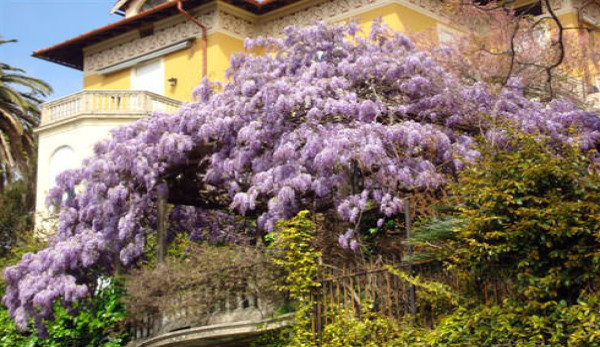 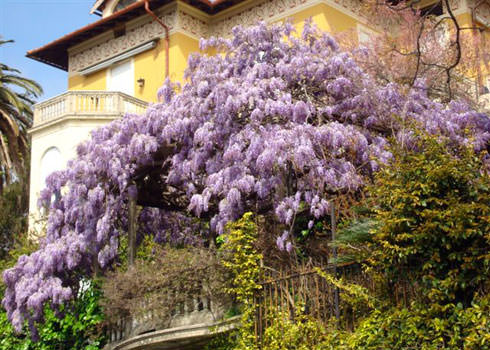 It’s full-blown spring now in Italy, and things are blooming like crazy. I helped my friend use a weed eater on his olive groves this week, and though I cut down a lot of grass, I mostly mowed down fields of full blooming ajuga and dandelions.

Back when I was a wholesale nursery salesman, I sold hundreds of flats of ajuga some weeks because it’s a great low groundcover for semi-shady areas. Here in Liguria, ajuga grows wild and very well. The blue flower stalks are almost a foot tall and thrive among the nooks of the orchards.

In the sunnier locations several different types of dandelions mass themselves and produce so many flowers that in some spots, only yellow is visible. Now that I’m a dandelion eater (my wife uses it in delicious vegetable pies), I couldn’t help thinking about the food value of all that I was mowing down. But we’ve already got enough tender young dandelion leaves in our own garden, so I just kept cutting.

Among all the riot of blooms, there’s one queen that dominates this season—the wisteria vine. The purple wisteria variety is really popular here, and the landscape is dotted with hundreds of lushly blooming vines these days.

Wisterias are pretty hardy and don’t usually get killed by the frosts every decade, so there are a lot of really old wisteria vines. One big vine at a local ex-monastery is known to have been planted before Napoleon came to rule Italy in the early 19th century. On the road to my friend’s house yesterday, I saw a very tall pine tree that was almost engulfed by a wisteria vine, making, in effect, a 60-foot-tall wisteria tree with a huge head full of hanging purple blooms. Some of my favorite wisterias are on the roadway fences of some of the big estates. Wisteria blooms cover 10 vertical feet for a distance of several hundred yards.

I’ve got another friend who has a large, second-story terrace entirely covered by wisteria vines. The effect of standing on the terrace while all the purple flowers hang down causes me disbelief at how wonderful it all looks, sort of like a fairytale land. That I don’t really have a spot or the space for a wisteria in our garden is one of my continuing problems. The place would look great with a bunch of wisteria rambling across and hanging down from all the little terraces, but then we wouldn’t have much space left for growing vegetables.

The dark-purple wisteria variety represents probably 99 percent of the plantings. There’s also a nice pale-lavender variety, a pink variety, and a few plants in white. I’m usually highly in favor of lavender, pink and white flowers, but in wisteria’s case, I’ll go along with the majority and agree that the dark purple wisterias are clearly the most interesting color.