Wolf Teeth in Piglets: To Cut, or Not to Cut?

Wolf teeth can harm other piglets as well as the sow, but it's not clear whether cutting them truly prevents this. Here's what we know. 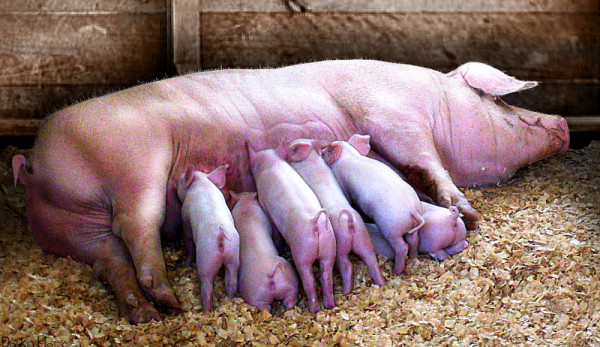 When my wife and I decided to farrow our own piglets rather than continue buying feeders from a local farmer, the reasons were sound. They included quality control, biosecurity and profit management‚Äîamong other things (including, of course, the dopamine release caused by cute little piggies). While we researched the duties we‚Äôd assume as pig breeders, I can‚Äôt say we were totally prepared for some of the more hands-on tasks. Castration, for instance, is really a chore one has to perform to truly understand. I‚Äôd say the same of cutting wolf teeth.

Wolf teeth, also known as milk or needle teeth, are eight sharp little teeth present on the upper and lower jaws of pigs at birth. While nursing, piglets can use these razor-sharp chompers to fend off siblings. In nature, this ensures survival of the fittest when litter size exceeds a sow‚Äôs number of teats; in farming, though, Darwinian prerogatives are outweighed by a need to maximize litter size. And for some farmers, that means cutting these wolf teeth.

How to Cut Wolf Teeth

Farmers who opt to cut wolf teeth‚Äîand not all do, which we‚Äôll discuss below‚Äîdo so for several reasons. As noted, piglets can use wolf teeth to prevent their siblings access to a sow‚Äôs teat, which can result in underfeeding or, if facial lacerations are incurred, a serious condition known as greasy pig disease (infection of the bacteria Staph hyicus that, in newborn piglets, can disrupt fluid balance and lead to death). Sow discomfort is another reason‚Äîsuckling while wolf teeth are present can hurt a nursing sow, causing her to stand and refuse nursing. Moreover, wolf teeth can negatively affect a sow‚Äôs teat health.

Those inclined to cut wolf teeth find it‚Äôs not too difficult. (Grinding them down is even easier, or so I‚Äôve heard‚ÄîI‚Äôve never gotten my hands on a tooth grinder.) Tools required are a dedicated pair of clippers (you can purchase specially made teeth clippers or pick up a hardware-store pair of pleir-type clippers) and a surgical-grade disinfectant, which you‚Äôll pour into a container and use to keep the clippers sterile. Gather into a bin 24-hour-old piglets‚Äîthis can be tricky if you have a protective sow, so be careful‚Äîand have a second, empty bin close by in which to deposit the processed piglets.

The best holding position is to cradle and tuck the piglet between your forearm and body like a football. Insert an index finger into the piglet‚Äôs mouth close to the back, forcing the mouth open, and manipulate the lips with other fingers to expose teeth you‚Äôre removing. Then, clip the tips of the teeth, moving from front to back on one side, then the other. Be careful not to cut lips or tongue, and don‚Äôt clip so far down as to endanger the gum. A clean cut will yield a flat surface‚Äîif sharp areas remain, re-clip them. When you‚Äôre satisfied, put your processed animal into the empty bin and move on to the next one.

Clipping piglet teeth is a traditional farming procedure, but some farmers choose not to do it. Why? For starters, it’s not crystal clear just how much good it does. Furthermore, clipping is a big no-no for many sustainable agrarians, and the practice is banned by animal welfare certifying agencies. An improperly cut tooth can shatter below the gumline, exposing the animal to mouth infection.

On a personal note, we clipped the teeth of our first litter born on-farm but have abstained with subsequent herds. Mentors advise us not to neglect the task, but we‚Äôve not suffered any of the ill effects some farmers experience. Both of our sows nurse their fanged piglets without complaint (they are, however, quick to express agitation when we take their babies from them for the task). It has not proven to be a deal-breaker for us, though I suspect this is in part because our pigs are from heartier heritage stock.

Sin of omission? Perhaps we are just making the convenient choice to do nothing, though we do go in for uncomfortable jobs when they need to be done, such as castration. We cut what we feel we need to cut. We just don’t feel that way about teeth.