The Wisdom of Women Farmers, Part 2: Thoughts on Money

Five women farmers over 50 share insight about their experiences in life and agriculture. In this second segment, the topic is money. 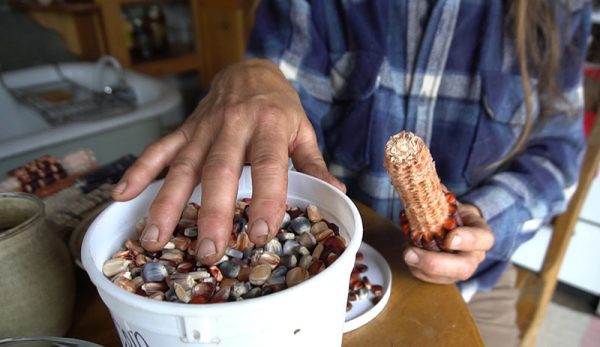 Money is often a taboo topic, yet it fuels some of our biggest life decisions. When we know what we love to do and why we love doing it, we move into envisioning how to make it our reality. Whether weâ€™re daydreaming about a play farm or setting serious entrepreneurial goals, an underlying question is always “How much will it cost? What will be my return on this investment?”

Five women farmers with more than 50 years of life experience share how financial health is woven into the fabric of their farm lives. (Read these women’s thoughts on love and also more about their backgrounds in the first part of this series.) They tell us that making a living is more than making ends meet. Itâ€™s about the abundance that farm living providesâ€”an abundance of challenges, surprises, learning, entertainment and nourishment. None of these wise women farmers romanticize it. Experience has taught them what is of value, whether or not that value is monetized.

Like most small farmers, flower grower and market organizer Jane Oâ€™Tiernan works two or three additional jobs that must accommodate her harvesting schedule. To make this lifestyle work, she has developed essential skills: record-keeping, seizing opportunities to sell, knowing the market and budgeting her time.

After earning college degrees in math and social work, Jane worked for the federal government on budget calculations for the food stamp program in the 1970s. She began selling flowers to a local restaurant after leaving that career. The combination of a heart for people and a head for numbers comes in handy when sheâ€™s figuring the finances for the farmers market.

Jane knows the farmers market business from the ground up. Her previous market experience of competing against vendors who didn’t grow the food they sold prompted her and a group of other producers to set up their own growers-only market. They got assistance from Kentucky State University, wrote a business plan and bylaws, got a health department permit, and learned the rules and regulations of a city with very strict policies. They set up the market to be as fair as possible to the vendors, charging them a minimal fee and 5 percent of their gross sales.

She knows that her Saturday market location is a good one, right next to a gourmet grocery and liquor store in a busy shopping center.

â€śWe have a business where a lot of people come on Saturdays, when weâ€™re open. They have money to spend, they may be celebrating grandmaâ€™s birthday or going down to the river,” Jane says. “Theyâ€™re ready to buy.â€ť

A cash machine is just inside the store, and thereâ€™s plenty of parking.

Despite good planning and great customers, â€śI cannot make enough money selling at the farmers market to support myself,â€ť Jane says. She continues to work in a restaurant and for the U.S. Census Bureau in addition to farming. She says she canâ€™t retire yet, even though sheâ€™s in her 70s. She plans to continue farming as long as she has the strength to do so.

Jane Post and her husband, Tim Hensley, had considered establishing a nonprofit company but chose a partnership model for their farm business because they prefer not having to answer to other peoplesâ€™ priorities, at least not people outside of their partnership. They went through what they call â€śa fiasco but really good experienceâ€ť trying to organize a community food hub with other passionate farmers.

â€śWhen we started to focus here [on our farm], it was much easier because weâ€™d already been through that,â€ť Jane says.

They applied what they learned to the workshops they would later offer on their own farm. They knew more about pricing food baskets, expanding value-added products and maintaining harmony in their relationship while under the pressures of dealing with the public.

This DIY couple prefers to avoid the bureaucracy and paperwork of grants, even though they are eligible to apply. A few years ago, Jane and Tim did receive some money from Kentuckyâ€™s tobacco settlement funds that were worthwhile, which reimbursed them for plants and timber harvesting supplies. Their main cash crop is currently gourmet mushrooms. Sold wholesale to restaurants, mushrooms bring in more than their community-supported agriculture shares and workshops combined. Marketing has not been a necessity yet, and they classify themselves as â€śFacebook reluctant.â€ť They advertise only to an email list and through word of mouth. Yet they sell out of all the classes and products they offer.

It helped their farm to start with a good nest-egg after Tim sold the chimney-sweep publication business that he ran. With Janeâ€™s career as a massage therapist and potter continuing to bring income to the farm, Tim could start growing food for more than their own household and frame it as a business. Jane says a â€śvow of povertyâ€ť lifestyle is too stressful, and sheâ€™s grateful that they owe nothing on their property. She believes in spiritual abundance combined with a practical, common-sense approach.

â€śMoney is like a current,â€ť Jane says as she refers to the flow of the current moving in and out.

In the past year Jane gave a lot of time and energy to support other family members going through major changes, and she received a wonderful apprentice who kept her garden thriving. Somehow it all worked out.

Jane believes, â€śYou have to love what you do and help others, and you have no choice but to succeed.â€ť

Judging by the abundant permaculture farm that Susana Lein calls Salamander Springs, itâ€™s hard to believe that at one time she lived a yuppie lifestyle in Chicago. She took a giant leap from designing strip malls for an architecture firm to joining the Peace Corps. She stayed in Guatemala afterwards, where it was easier to live her values. Life below the poverty level put a lot into perspective.

After returning to the U.S., she and three friends bought a 98-acre property. She was rich with a clean, fresh spring and dense forest. The land was a bargain at $500 an acre. It was considered good for only one thing, logging, yet it was too steep to do that very efficiently.

â€śItâ€™s a hard process to start from scratch,â€ť Susana says.

She started with no soil and built it up into lush gardens over 20 years.

She camped on the land in a tent, rented a room in town during the winters and occasionally slept in the cab of her pickup while she built her strawbale house and outdoor kitchen. By using repurposed and salvaged materials while teaching work-trade workshops, her house cost only $5,000 to build. Today, itâ€™s a cozy, clean model of energy efficiency and natural building techniques. That experience was valuable. She shares only one regret: â€śI guess the mistake I made was probably breaking away too soon from a paid job and trying to live from the farm. It continues to be a struggle.â€ť She recommends getting a solid infrastructure in place before diving all the way in.

How does Susana live a more self-reliant and less cash-based lifestyle? With deep dedication and a redefinition of wealth. She runs a real homestead. She grows organic chicken forage that doubles as a cover crop so she doesnâ€™t have to buy feed. She barters staple crops such as cornmeal and beans for fresh milk from a nearby farm. Susana gets income from selling her produce at the Berea farmers market, in local stores, in CSA baskets and online. In recent years, she has taught more workshops, hosted tours and relied on apprentices to help carry the workload. Her perspective on wealth is still grounded in the tangible resources at her fingertips.

â€śI feel that wealth is in the soil, itâ€™s not in money,â€ť she says.

Coming from a â€ślandedâ€ť family placed Susan Harkins in a more privileged situation than most struggling small farmers and women farmers, but she still had to buy the land from her father. Spousal support has let her try many farm enterprises and a variety of complementary career paths. She takes none of this for granted. She has used her relative wealth to support organic agriculture through activism and education.

Susan knows how to leverage her resources. Because Kentucky is the bourbon capital, an abundant resource is distillersâ€™ grains. The Kentucky Distillersâ€™ Association supported aquaculture research in using wasted grains as fish feed. Through a U.S. Department of Agriculture small business research grant, Kentucky State University funded the development of Bubbasueâ€™s brand of value-added products. It paid for equipment and packaging over about a year and a half of market testing. Susan (also known as Bubbasue) learned the difference between charging by the pound and by the fin. She found out that even though customers from as far away as Minnesota sought her organic farmed shrimp, it costs more to ship the product than the shrimp is worth.

â€śThe bottom line to all of this, as great as it was, it was cost prohibitive,” Susan says. “Thereâ€™s no way that I can raise the shrimp, package and produce them, and sell them at a price point that people are willing to pay.â€ť

Susanâ€™s business sense was honed through owning a community newspaper and later a restaurant, where she served her own shrimp. She also leases her land for cattle and has raised sheep and other small livestock. Early on, she was one of the first organic tobacco growers in Kentucky.

â€śIt was labor intensive, and it didnâ€™t have the weight because it wasnâ€™t saturated in whatever they saturate tobacco in to make it heavier. Mine didnâ€™t have that,â€ť Susan laughs, implying chemicals added the extra weight and made it difficult for organic tobacco to compete.

Her livelihood has not depended on the profitability of her farming, but the research she contributed to is paying other beginning farmers in advance, so they donâ€™t have to take the same losses.

Pamla Wood keeps detailed records of raising and selling goats, sheep and wool. Her career in soil science trained her to do so.

She sends her records to KSU for analysis. She learns which ewes are healthiest and producing the lambs with the best weight. Even tracking her finances for each enterprise has not resulted in a profit. Yet.

â€śI try to run it like a farm farm,â€ť Pamla acknowledges, and she looks forward to the day when it will prove financially sustainable.

Spinning wool and knitting has captured her attention. She might have found a niche market for the soft ringlets of wool she can sell at a local fiber store. She recently invested some inheritance money on a new spinning wheel. While a market definitely exists for home-grown clothing, Pamla doesn’t know whether she will produce enough to sell.

â€śI carded all this by hand,â€ť she explains as she shows off the first sweater she made from her own sheepâ€™s wool, with a thick cable knit that she leisurely spent two years working on.

A comfy product that she would like to make and sell are felt-lined slippers. She counts up the hours she spent carefully and lovingly shrinking and felting the wool. She considers how she could use a washing machine instead of doing it all by hand. She is experimenting with dying and picking out the colors that she would personally want to wear. Clearly, her hobby farm is satisfying her desire to be at least partially self-sufficient.