The Wisdom of Women Farmers, Part 3: Thoughts on Death

Five women farmers over 50 share insight about their experiences in life and agriculture. In this second segment, the topic is death. 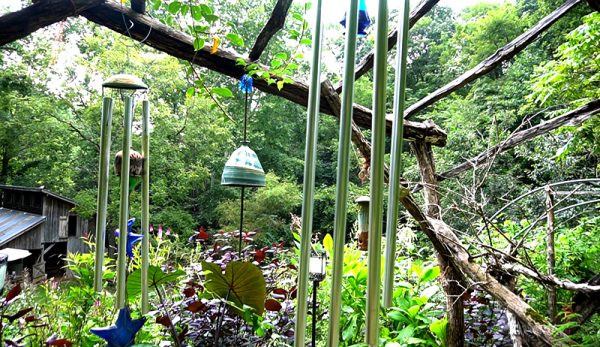 Death takes many forms. On a farm, it can be a daily reality, but that doesnâ€™t make it easy. Living through five decades of life means inevitable losses affect you. We can learn from resilient elders how theyâ€™ve built their farm-based lives through cycles of death and birth in a variety of forms. Five women farmers interviewed for the Wisdom of Women Farmers project share their perspectives in this final installment of articles. Read their insight in previous articles on the topics of loveÂ and money.

Pamla Woodâ€™s retirement was like a rebirth for her. Beginning at age 50 with a new outlook and a new piece of property, she applied the knowledge sheâ€™d built over her lifetime to her own farm. Itâ€™s different to live your dream and face the reality of being responsible for other living things that have fairly short life spans. Accepting the cycles of life could be different for someone who doesnâ€™t grow up on a farm. How did she manage learning these lessons later in life?

Years prior, she had explored the concept of dying well and the acceptance of death. She applied this to losing dogs, grandparents, good friends and relatives. She came to terms with it all in a healthy way. However, she acknowledges, â€śThereâ€™s a big difference between livestock and pets.â€ťÂ

She lost many goats to parasites early in her farming ventures. She recalls a fiercely cold winter when birthing kids froze to death. It was very hard for her to watch the mothers paw at the babies and cry for days afterwards. Even so, Pamla views losing livestock on what she calls â€śa different scale of trauma.â€ť Chickens disappear when predators take them, and as Pamla says, â€śItâ€™s sad, but everything loves to eat chicken. Thatâ€™s what happens.â€ťÂ

On the other end of the spectrum, Pamla shares her sense of awe in becoming accustomed to animals coming into this world: â€śThe births were incredible. I had never seen anything getting born.â€ťÂ

â€śAs you get older, too, you learn this: You canâ€™t spend your life grieving,â€ť Pamla says.

She accepts the fact that raising meat goats means that taking them to the stockyards will end their lives. When she first got chickens to raise, her partner, Steve, doubted her ability to kill them. To be honest, Pamla says, so did she.

â€śBut you know, soft-hearted women have been doing this for generations,â€ť she says.

She went some time without eating meat, has vegetarian friends, and has come to the conclusion that, â€śIf youâ€™re going to eat meat, then you should be able to kill it.â€ť

As an aquaculture research farmer, Susan Harkins also struggled with the idea of humanely raising and ultimately ending the lives of the fish she had grown to love. Her tilapia knew when it was feeding time, and Susan got excited every time they would â€śboil the waterâ€ť as she describes it, churning up bubbles when she tossed in food.

To manage shrimp and tilapia in the same pond, Susan had to cage the predatory fish so they wouldnâ€™t eat the shrimp.

â€śThe idea of keeping tilapia in cages just didnâ€™t seem right to me,â€ť she says, but she reluctantly agreed to try it. â€śI never lost a fish, never saw a dead fish, ever. Never saw anything stressed or anything in any way that made me uncomfortable with raising fish that way, which amazed me.â€ťÂ

Susan worried next about how to harvest the fish: â€śIâ€™m going to bring out all these live, beautiful fish. How do you kill them? How do you deal with that?â€ť

She remembers having nightmares about it. With guidance, Susan learned to basically put the fish into ice cold water and they would slowly go to sleep. She could live with that.

In her personal life, Susan has also felt the pain of loss. Her husband passed away during the time she was shrimp farming, and as a result, she says, â€śI lost a lot of my energy. Going through that process was tough, and beautiful too.â€ť The shift in life propelled her into the realm of agricultural activism. Read more about her love of organic farming in the first article in this series. She proved Pamlaâ€™s words of wisdom true, that you canâ€™t spend your entire life grieving.

Like Pamla, Jane Post is also embracing her post-career life. Allowing that â€śworkâ€ť part of her to die has been relatively painless. She doesnâ€™t miss the stress of driving to appointments and getting enraged at traffic, which she admits was especially stressful as she went through menopause. Another sort of death that wise women of a certain age experience, the change of life can be transformational in many beneficial ways. Jane credits this phase of life for aiding her transition to full-time farm life.Â

For more than 20 years, Jane worked as a massage therapist.

â€śI thought that I could do it until I was really old,â€ť Jane says. However, â€śgoing out and doing massage was a challenge for me.â€ť

She needed to wash up from gardening and doing pottery at home, clean her dirty fingernails, then drive somewhere to get to an appointment on time. Once there, she needed to relax enough to work calmly and give her client her full attention.Â

Now, Janeâ€™s energy can be redirected to the community, growing plants, managing a business and becoming a mentor for younger generationsâ€”all of which she has done recently. She works intuitively, without lists or deadlines.

â€śI have a thing that I call my desk out by the garden,â€ť she laughs.Â

She reflects on the solid time sheâ€™s had to complete her own projects: â€śThat might be why my garden looks so good! Iâ€™ve been home two years without being interrupted and having to go work outside the home.â€ť

Death is part of the life cycle. A closed-loop system like Susana Leinâ€™s farm is a place to be immersed in that reality. Decomposed plants and animals have, in a sense, become Susanaâ€™s lifeblood. By building up the shallow soil on top of a rocky ridge, loads of organic matter give back to the earth by providing the essential matrix and minerals for vegetables, herbs, flowers, legumes and animals to thrive. Read more here about the richness of Susanaâ€™s soil.

She rejects the mindset of pulling out of the land what it will give, depleting it and moving on. Rather, Susana practices and teaches permaculture, a lifestyle of permanence and long-term, continued enrichment of the land.

â€śPermaculture isnâ€™t just about agriculture,â€ť she tells a group of students on her farm. â€śItâ€™s about mimicking natural systems.â€ť One of the ways nature works is by not wasting anything. â€śNothing in nature tills, right? You see the self-fertilizing forest and the prairies.â€ť She puts it simply, â€śOne organismâ€™s poopies is another organismâ€™s food.â€ťÂ

Susana replicates this cycle by fast-forwarding the succession of plants, helping along natural processes. She grows cover crops in the place where they are also used as mulch. She points out, â€śMulching happens in nature, thatâ€™s how the soil is built up in the woods and in the prairies.â€ť

Animals are another part of the larger integrated system, rather than just a product that requires inputs. â€śTheyâ€™re tillers, and theyâ€™re clean-uppersâ€ť she says as her chickens go to work taking down buckwheat and cowpea cover crops. â€śThey do a job if you put them in the right place.â€ť

With this community of life surrounding her, Susana still has to remove less-productive members from the team. Even though sheâ€™s skilled at butchering poultry, she says, â€śItâ€™s never fun.â€ť When speaking about some laying hens that arenâ€™t producing eggs, she says she needs to harvest them soon, but, â€śsometimes I let them go longer, because I feel sad for them.â€ť When the time comes, she says, â€śI appreciate their life and I let them know, but itâ€™s a hard moment. I just feel like itâ€™s really important to be part of that cycle.â€ť

Being an organic farmer doesnâ€™t always mean “live and let live.” Jane struggles with raising cut flowers amidst wildlife pressure and destructive insect outbreaks. She takes protective measures such as fencing and growing inside hoop houses, and she creatively adapts to work with nature.

â€śYou have to like to weed, because I donâ€™t use weed killers,â€ť Jane says. Organic-approved sprays to control diseases do exist. However, Jane says, â€śsome of them I find to be more toxic than non-organic things.â€ť So she pulls weeds by hand and uses row covers. She has adapted her products rather than battling the elements. Rather than try to kill wildlife that destroys her crops, she changed varieties to flowers that werenâ€™t as attractive to deer. In addition, she allows a deer hunter on her property to help manage their population.

For organic, small-scale farmers like these five women, the death of the small farm is a real concern.

â€śItâ€™s important for me that other people know how to do this. Besides, itâ€™s not that hard,â€ť says septuagenarian Jane Oâ€™Tiernan. Lately, she has had less help from young people to assist her on the farm. She has adapted by downsizing her production.

Over decades of attending market meetings and conferences, Jane has noticed a shift from predominantly male attendees to more women. However, she also notices most of them have gray hair. â€śThereâ€™s a lot more older people and thatâ€™s a big problem,” she says. “Who will we leave our farms to?â€ť

All the women farmers in this series have uncertain answers to that question. They each want to see their legacy live on in the hands of young farmers who value sustainable stewardship, but none of the women has children who are serious about farming. Jane explains her own conundrum: â€śThe problem is, you want to get a high-dollar value for your land, and the best way to get that is to sell it to somebody, and your last crop will be a row of houses, instead of a row of sunflowers or zinnias.â€ťÂ

The cost of starting a farm business is a major obstacle to most new farmers, yet for Jane, giving up farming would mean giving up her livelihood, so she has to be financially smart about this decision.

â€śPeople that I would prefer to sell to, or families with kids, may not be able to afford it. Thatâ€™s my income for the rest of my life,â€ť she says.Â

Jane sums up why she passes on her knowledge through teaching: â€śThe bigger issue for me is, how do we get more people to come into farming? I think farmers need to share as much information as possible.â€ťÂ

Pamla, Susan, Jane P.,Â  Susana and Jane O. serve their communities as mentors, teachers, parents, elders, food providers and environmental stewards. Hopefully, as they continue to share their wisdom, the important work of these women farmers will remain resilient and relevant.