Taylor's checkerspot butterfly numbers are on the incline in the Pacific Northwest thanks to an innovative sustainability program done in partnership with Washington correctional facilities. 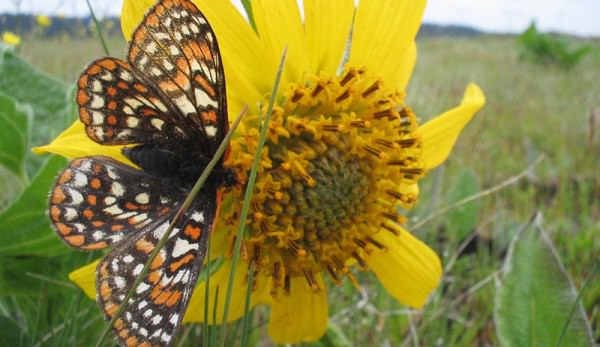 You know how they say stats don’t mean a whole lot until you can put a face to them? Well, here you go. Amid the scary numbers depicting the decline of pollinators, like bees and butterflies, is the story of one suffering butterfly: the Taylor’s checkerspotÂ (Euphydryas editha taylori).

This butterfly once graced the Pacific Northwest with its beautiful wings, but saw a dramatic decline to levels of near-extinction. Now, thanks to a program founded by The Evergreen State College and the Washington Department of Corrections, PBS News reports the Taylor’s checkerspot is seeing a comeback thanks to an unlikely ally.

InmatesÂ at the Mission Creek Corrections Center For Women, outside Seattle, are helping rehabilitate the butterfly populations in the Puget Sound area and beyond. As part of a captive butterfly breeding operation that’s part of the Sustainability in Prisons Project, these women have adopted the title of “butterfly technicians”and are giving the Taylor’s checkerspot a second chance at life.

More than 30,000 butterflies have been reintroduced to the wild thanks to the work done by the Sustainability in Prison’s Project and the Oregon Zoo. In the past year, the butterfly population has double to several thousand near Olympia, Wash., alone.

And thanks to the effort, the women inmates are discovering a new interest helping them on the road toward rehabilitation. Some have even gone on to college at The Evergreen State College after their release.

Learn more about the project via PBS News.