Yesterday, the little girl lambs came to visit Uzzi and me. They giggled and nudged one another and then Grace, the spokeslamb asked, "You goats look funny. Why don't you have wool?" 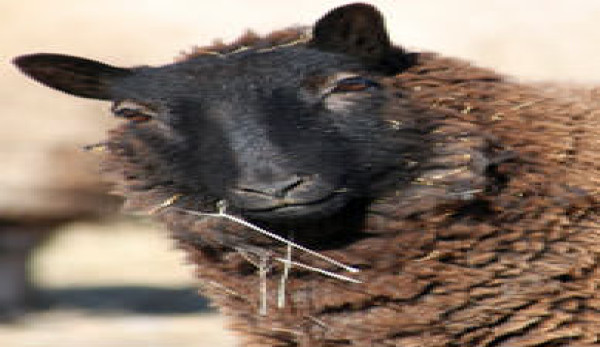 Yesterday, the little girl lambs came to visit Uzzi and me. They giggled and nudged one another and then Grace, the spokeslamb asked, “You goats look funny. Why don’t you have wool?”

Uzzi and I looked at each other. “OnlyÂ sheep have wool,” Uzzi told them.

We didn’t know what to say, so we looked it up. Here are some things we learned.

Llamas and Angora goats have fiber, but it’s not like the fiber from sheep. Wool has a unique outer covering, called the cuticle, that makes it stick together. Inside, a cable-like structure imparts strength. A wool fiber is so springy and elastic it can be bent more than 30,000 times without harm. Stretched, its crimp allows it to spring back into shape.

The first sheep, called mouflons, didn’t have wool. They were like some of today’s hair sheep, but they did have a wooly winter undercoat that they scratched out on bushes and rocks each spring. Ancient people gathered it and wove it into crude fabric. Almost as soon as sheep were domesticated about 9,000 years ago, humans began selecting for wool. Archaeologists at a dig near Sarab, Iran, found a figurine of a woolly sheep carbon dated to 4000 B.C.!Â Â Â Â Â

At first, people worked fleece by hand by rolling tufts of fleece along their thighs, adding more fiber as needed to create a length of yarn. Later, theÂ drop spindle was invented. All wool was spun on hand-held spindles until theÂ spinning wheel was invented in the 13th century A.D.

The weaving of woolen fabric was already well-established in Britain at the time of the Roman conquest in 43 A.D. According to the Doomsday Survey conducted in 1066, there were more sheep in England than all other livestock species combined. By 1300, there were an estimated 15 million sheep in the British Isles.

Rich British citizens preferred fine woolen goods produced in Flanders so in 1326, Edward III ruled that only “kings, queens, earls, barons, knights, ladies and others who spend ÂŁ40 a year of their rents” could purchase cloth woven outside the British Isles.

Queen Elizabeth I (1533-1603) ordered everyone over the age of 6 to wear “a cap of wool, knit and dressed in England” to Sunday church services. (Elizabeth, however, wore silk.)

Wealthy 17th-century wool merchants in the Cotswolds and East Anglia built lavish estates and donated money to build huge churches. Brasses in their churches depict wool merchants with their feet on woolsacks and surrounded by shorn sheep. Inscribed on one merchant’s grave: “I praise God and ever shallâ€”it is the sheep hath paid for all”.

And then sheep came to America. We’ll talk about that next week!