Working Animals On The Farm: Goats

They can haul. They can mow. They can make milk and fiber. Is there anything goats can't do? 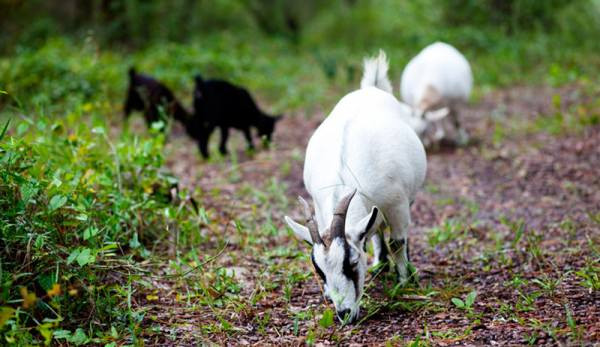 Your farm animals are more than beloved pets. In the series “Working Animals On The Farm,” weâ€™ll explore the various ways livestock can earn their keep on your land.

When folks think about â€śworkingâ€ť farm animals, goats are not often the first to come to mind. There are however numerous tasks and chores around the farm that goats can be trained to do. A goatâ€™s lifespan mirrors that of a large-breed dog, so it can be well worth the time and effort to train your goat to become a working animal.

Goats are incredibly smart animals, and almost any breed can be trained to do some sort of work around the farm. Male goats of any breed can typically pull more or carry more weight than the female of the breed, but itâ€™s advisable to start training a male goat as a young wether (aka, castrated male goat). As with horses (known as geldings), this results in a calmer, more docile and easier-to-work-with male. It also reduces aggressive behavior in the animal.

Many owners of working goats find cross breeds to be ideal for tasks such as hauling. A cross between a Boer goat and a dairy goat is quite common as a working breed. Others swear by the work ethic of the Saanens, a Swiss breed known for its ease of management.

Goats are great pack animals and adept at pulling carts. This skill may be helpful for farm tasks, like bringing in the harvest, hauling firewood or any task that requires an extra set of hands (or hooves).

Goats can also be extremely useful for clearing land. Theyâ€™ll eat almost all types of grasses, forbs, brush and young saplings. Their manure is also helpful for land restoration. Like any animal, though, they will first eat the â€śpreferredâ€ť forage before eating the coarser or less desirable species.

Other forms of work for goats can include being raised for their milk, meat or fiber. Various breeds are suited better than others for these respective tasks. The Angora breed is known for its mohair, and of course, cashmere types are valued for their fibers, as well.

Goats can also be employed as therapy animals, in petting zoos and in educational settings, such as for 4-H projects. Some can be used for showing, as well as strictly for breeding.

Training goats for various tasks can begin as early as 3 months old. The earlier a goat is trained, the easier it is for its handler to work with, especially as it gets older and stronger. This also helps to forge a bond between the animal and the person or people it will be around for many years. If the goat is intended to eventually pull a cart or be harnessed, itâ€™s a good idea to start getting the goat used to being led by a leash, even if it is for only a few minutes each day. Reinforce desired behavior with treats so that the goat looks forward to its training sessions.

By the age of 1 year, a goat can start to be trained to carry a pack. Take caution to overburden the animal. It will be able to carry more weight as it matures, but it helps the animal to get used to carrying a load. By 2 years old, goats can begin being trained to pull a cart. An adult goat can be expected to pull a load approximately equal to its own weight. Some breeds of male goats can pull twice their weight, but itâ€™s not a good idea for the health of the animal to pull more or to be made to pull heavy loads repeatedly.

Be careful if attempting to start the training an adult buck. Theyâ€™re likely to be more stubborn, independent and defiant than females and younger males. Inexperienced handlers should not expect a high level of success. Start them young and you can expect many years of faithful and reliable service from your working goat.

It should be noted that if you are looking to raise any kind of goat for any purpose, working or not, they will not thrive if theyâ€™re alone. Goats are by nature herd animals, and as such, should not be raised in numbers less than two. They will be happier, less stressed, get into less trouble and be more productive if they have other goat friends.

Chris Bond is a professional horticulturist in Maine and has raised chickens since 2011.Â