Build a Worm Bin Buffet for Your Chickens

Here's how to build an in-ground worm bin (and what to feed the worms) so your flock can chow down during cold-weather months. 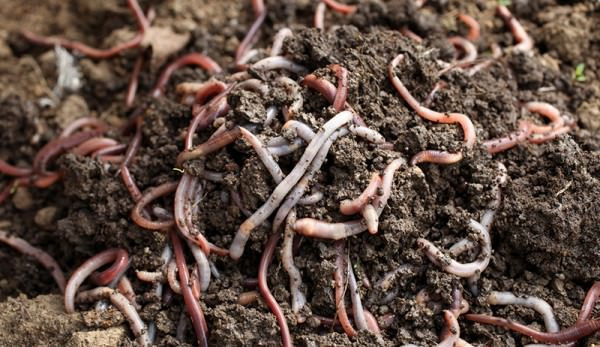 My in-ground worm binās squeaky lid conjures the sound of a creepy cryptās opening door. It reminds me of that spooky childrenās rhyme, āThe Hearse Song:ā āThe worms crawl in; the worms crawl out; the worms play pinochle on your snout.ā The worm bin is in fact a crypt for things once living that are now dead: leaves from the garden, chaff from roasted coffee beans, cotton from my worn-out blue jeans. And the worms ā specifically red worms (Eisenia fetida) ā do crawl in and out. However, there arenāt any signs of pinochle or snouts just yet.

You might be more familiar with smaller worm bins that people keep in their kitchens. Some keep in-house worm bins going for many years, but those require a bit more maintenance than their promoters let on. Iāve curated an in-house worm bin a couple of times, keeping the worms in a 10-gallon plastic tote and feeding them kitchen scraps supplemented by shredded newspaper. Then, Iāve moved on to other projects when the bin became a bad houseguest and generated too much stinky moisture or flies and maggots, which hatch from fly eggs laid on produce peels in the kitchen or grocery store.

However, when I saw an outdoor worm bin built with concrete block sides and a plywood lid, I knew I would create one myself. The advantages over an in-house bin were obvious.

A little research revealed red wormsā ideal conditions: temperatures between 59 and
77 degrees Fahrenheit; moisture level of 80 percent (like a damp sponge); pH between 5 and 9; minimal ammonia or salt; and no light. Also, worms are cold-blooded and breathe through their moist skin.

I knew that even in my mild zone 7 in North Carolina an aboveground worm bin meant the worms would spend winter too cold to be active. And if the bin dried out in summer, compost production ā and worm reproduction ā would suffer. Few things motivate me like a design problem.

So I buried this problem; an in-ground worm bin was the way to go. The surrounding soil would keep it warmer in winter and cooler and damper in summer. But Iād need to figure out how to keep it from flooding when it rained; how to keep it moist during droughts; what organic waste would go into it; and schedules for feeding the chickens from it and harvesting the compost. Of course, I also wanted to keep the cost as low as possible.

I poked around the inventory behind my house. (Note: The plantings in front of my house are ācottage/garden styleā for the sake of my wife and the neighbors, but the area behind the house is what I call ābarnyard styleā for me.) Behind the garage I found a scrap pile of pressure-treated posts and pickets from past fence projects, a tattered screen door, a used soaker hose and some wire-fencing scraps. The wheels in my brain were turning.

To begin, I chose a well-drained spot on high ground that wouldnāt flood in a rain. It was also accessible for a wheelbarrow so I could shovel out prime compost once a year. Additionally, it was just a few feet from a 275-gallon rain barrel.

Measure and Dig the Hole

An area measuring roughly 3-by-6 to 4-by-8-feet and about 1 foot deep makes a worm bin that can swallow lots of organic waste and grow thousands of red worms. I recommend using an old screen door for a lid, so you can:

After youāve dug the hole, line the inside with a solid frame to keep the dirt walls from caving in and support the lid. Concrete blocks (commonly called cinder blocks) are 16 inches long, 8 inches wide and 8 inches tall, so one course of blocks will give you enough depth. Sixteen blocks will line a 4-by-8-foot bin. You can also use pressure-treated planks or rot-resistant planks of the heartwood of red cedar, white cedar, cypress or redwood, if they are available locally. Untreated wood that isnāt rot-resistant, such as pine or oak, will last three to eight years and then need to be rebuilt.

Regardless of wood type, three 8-foot planks of 2-by-12 inches will suffice for a 4-by-8-foot bin. Cut one plank in half to 4 feet, then nail or screw (with 3-inch screws) the four pieces together to create the 4-by-8 frame, as if you were making a raised bed. Drop it in your hole.

My pile of 6-by-6-inch scraps cut from the tops of pressure-treated fence posts gained new life as a free lining for my bin. I stacked two courses of these scraps and joined them together with 3-inch exterior grade screws so they would stay in place. I used an old screen door for a lid. I could have dug a bin that matched the doorās dimensions, but I instead framed the top of the bin with pieces of scrap 1-by-6-inch pickets to fill the gap between the door and the 6-by-6s. (See photo on page 73.)

Once the bin was dug and the frame was installed, add the old screen door. Use the old hinges to secure one side of the door. Add one or two handles on the other side to make it easy to open. Then, lay the soaker hose on the door, and sandwich the hose to the door with a section of fence wire and fence staples. Use a scrap piece of a 2-by-4 to prop the lid open when youāre adding organic waste, letting the chickens feed or harvesting compost.

Cover the door with heavy-duty landscape fabric or a double layer of shade cloth, so that light wonāt bother the worms but some rain can get in. Finally, have a tarp, a piece of plywood or some metal roofing handy to cover the bin if heavy rains set in, so it wonāt fill up like a tub of water and drown the worms.

Connect the soaker hose to the rain barrel with a garden hose and spigot. Youāll add materials that are dry, so the steady drip of the soaker hose over the entire bin will sustain a roughly 80 percent moisture level. The spigot lets you turn off the water if there has been enough rain.

Resources such as Rhonda Shermanās Vermiculture Technology (2010) and Mary Appelhofās Worms Eat My Garbage (2016, 2nd edition) recommend starting with 1 pound of red worms per 1 square foot of worm bin. But thatās for optimal composting. At about $25 per pound via mail order (you can find many vendors online) and with 32 square feet of bin, that was too expensive for me.

My goals were less about using a lot of worms to eliminate waste and more about using some waste to generate a lot of worms. For that reason, I started my worm bin in the spring with a couple of pounds of worms. They live only in the airy top couple of inches. I cover them with an inch of waste every week or so, and they multiply.

Of course, being a lazy chicken-keeper, I didnāt want to spend time or energy harvesting the worms for the chickens. So come winter, when the supply of bugs has diminished, I open the lid on the worm bin once every week or so and let the chickens scratch and feast on worms, other bugs and any seeds they find. I wait to open the bin an hour before they are ready to roost. That way, they exit the bin on their own and return to the coop without any effort on my part.

By spring, the chickens are banished from the bin, but I open it in the morning so the sunlight will force the remaining worms to go deeper. I can then harvest the top few inches of mostly worm-free compost into a wheelbarrow. I use either a shovel, pitchfork or seed fork depending on the texture and wetness of the compost.

I let the worms go deeper again for a few more hours and repeat the process four or five times until thereās just a few inches of compost and writhing worms at the bottom of the bin. Then I restart the process of adding organic waste to generate more worms for next yearās winter buffet.

I put tender kitchen scraps and chicken poop from the coop into my regular compost bins. However, items that are too coarse for a compost bin need help to decompose in less than a year. The worm bin essentially helps me turn this costly trash ā especially if you’re paying for garbage pickup ā into free protein for my chickens. The annual supply of high-quality compost is a bonus.

According to Crystal Stevens in Worms at Work: Harnessing the awesome power of worms with vermiculture and vermicomposting (2017), “A rule of thumb among well-known vermiculturists is that worms can eat their weight in one day. For example, 1 pound of worms will go through 1 pound of food scraps daily.”

To “feed” your worms, consider the following: