Last week I posed for Christmas card pictures with a cedar wreath around my neck. 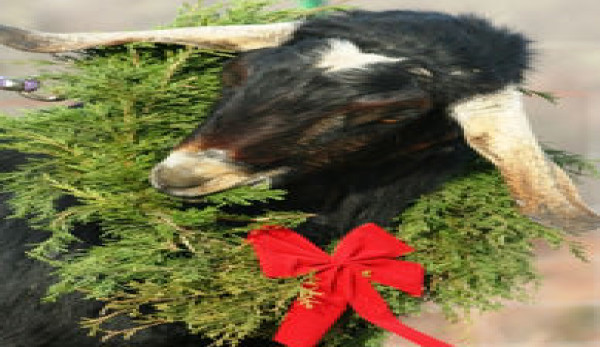 Last week I posed for Christmas card pictures with a cedar wreath around my neck. Mom tried it on Uzzi but it wouldnāt go over his horns, so he pouted while I posed. Ha! Mom and Dad got frustrated because I ate part of the wreath but hey, cedar is yummy!

Mom makes Christmas cards by gluing real photos on blank Strathmore cards, then decorating the insides with stickers and a saying.

This year the cards with my picture on them say: āMerry Christmas and Goatwill toward Man.ā

The holidays are the perfect time to touch base with family and friends, so I wrote to my biological mom, Ozark Jewels Peppercorn, and tucked the note inside the card I sent her. Here is what I told my birth mom:

Since itās Christmastime, I thought I would write you a letter to tell you how Iāve been. I live at a place with a lot of goats. There areĀ half a dozen lovely Boer ladies here (and Big Mama!) but my mean old Mom and Dad wonāt let me breed them. This fall I did get to breed Bon Bon (you remember Bon Bon) and a visiting doe named Bella. I think I should have dibs on those Boers too.

I have three children, Hutch, Curzon and Jadzia. Curzon and Jadzia have Star Trek names like I do, but I am named after a great Klingon warrior and they are named after something called Trill. My human mom plans to name my new kids after Trill too: Emony and Lela. But if thereās a boy, his name will be Drex because General Martok has a son named Drex.

Apart from siring cute babies, I write a blog for Hobby Farms magazine. They get nice comments about me, about how clever and beautiful I am. Iām very studly, you know.

I know a lot about writing and computers. Thatās because my human dad taught me how to compute. My friend, Uzzi, and I sneak into the house after everyone is in bed and we compute all the time. Uzzi and I are smart!

My human mom says Iām getting an apprentice next month, but I donāt think I like the sound of that. He will be a tiny kid. It might be fun to be a role model but he will grow up fast and he is going to breed Jadzia next fall! Do I need a son-in-law? Iām not sure.

Tell my sisters ‘hi’ for me, Mom. And tell Juniper her noisy son, Edmund, is doing fine too (wow, can that boy scream!).

A great big Merry Christmas (Blessed Yule or Happy Hanukkah, whatever your seasonal holiday may be) from Uzzi and me. See you next year!Ā Ā