WSPA Shows Its Pawprint to the United Nations

Photo courtesy of PRNewsFoto/World Society for the Protection of Animals Luis Carlos Sarmiento of WSPA (left) hands 108,571 Pawprint petition signatures to the executive coordinators of Rio 20, Ms. Elizabeth Thompson (middle) and Mr. Brice Lalonde (right). The World Society for the Protection of Animals gave almost 110,000 signatures on its petition to improve treatment […] 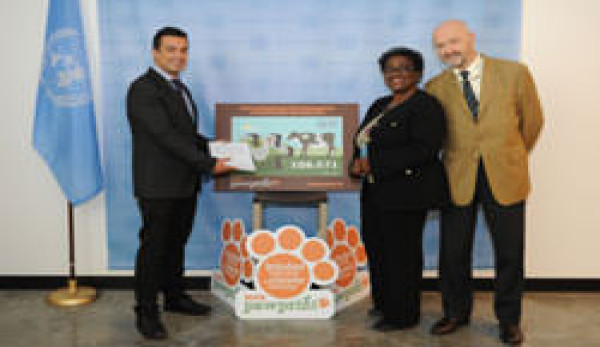 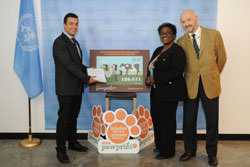 Photo courtesy of PRNewsFoto/World Society for the Protection of Animals

The World Society for the Protection of Animals gave almost 110,000 signatures on its petition to improve treatment of farm animals, to the Executive Coordinators of the United Nations Conference on Sustainable Development. The campaign, called Pawprint, is how the WSPA is hoping to put farm-animal welfare on the agenda at Rio+20 in June, 2012.

â€śWe are thrilled that tens of thousands of people around the world have acknowledged that the well-being of animals is crucial to the future of people and our planet,â€ť says Luis Carlos Sarmiento, country director of WSPA-South America. â€śNow, more than ever, it is evident that better animal welfare belongs on the conference agenda.â€ť

Pawprint wants to make sure the co-chairs of Rio+20, John W. Ashe and Sook Kim, know how important animal welfare is to sustainability, farmersâ€™ livelihoods and food safety.

The WSPA is a group, which has offices in 18 cities around the world, that works to stop animal cruelty in every country. According to the groupâ€™s website, it â€śbrings about lasting change by: helping people understand the critical importance of good animal welfare, encouraging nations to commit to animal-friendly practices, and building the scientific case for the better treatment of animals.â€ť Achievements include having bullfighting banned in Catalonia, Spain; establishing the Animal Relief Coalition for Haiti, where 40,000 animals have been treated; opening a bear sanctuary after the 2011 floods in Pakistan, began a process to have the bear-farming industry in South Korea banned; and helped Bali sign an agreement allowing the WSPA to immunize 400,000 dogs on the island.

To be a part of the Pawprint campaign, sign the petition here.

What To Watch For When Checking Cattle On Pasture