Poultry Profile: Get to Know the Wyandotte Chicken Breed

The Wyandotte is a hardy dual-purpose bird with loose, fluffy feathering that lends to its round shape. 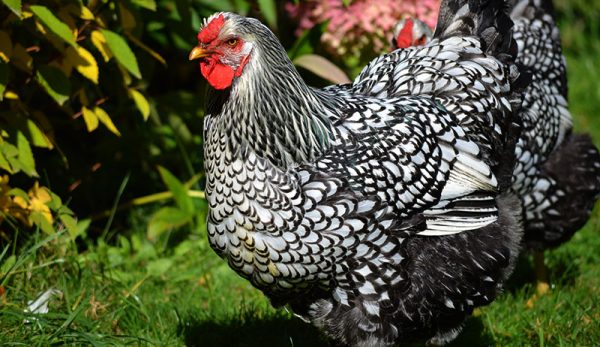 This breed was developed in the 1870s in the U.S. and is known for its many colorations and dual purpose (meat and egg production).

Oklahoma State University Extension calls the Wyandotte “a good, medium-weight fowl for small family flocks … Their Rose combs do not freeze as easily as single combs and the hens make good mothers. Their attractive curvy shape, generally good disposition and many attractive color patterns (varieties) make them a good choice for fanciers as well as farmers.”

The Wyandotte was admitted to the American Poultry Association’s Standard of Perfection in 1883.

They are in the American Class.

These birds tolerate cold weather well. They are prolific layers of brown eggs and dress well as broilers.

This breed comes in standard and bantam sizes.

The Wyandotte, developed in upstate New York, gets its name from the Wyandotte Nation, a Native American tribe from that region. But the breed doesn’t have any direct historical association with the tribe.

The Wyandotte is a medium-weight breed with yellow skin. The birds have a rounded appearance with a short back and tail as well as loose, fluffy feathering that lends to their round shape.

Wyandottes are among the most popular breeds for small farm production. Silver Laced and White are the most common varieties.