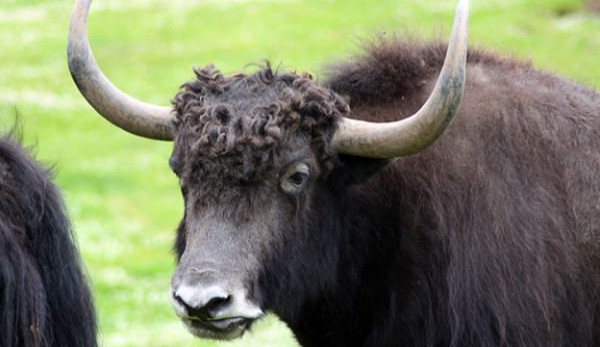 Use: Yaks are marvelous hobby farm livestock. They yield respectable amounts of high-butterfat milk; lean, succulent meat (it’s said to make world’s best jerky); beautiful pelts to be used as rugs or lap robes; and cashmere-quality, 14-16 micron undercoat that can be combed out, rather than shorn. Yaks make admirable pack animals and are reasonably easily taught to carry riders on their backsājobs they were bred to do in their native land. A well-conditioned adult yak can pack up to 225 pounds for long distances at speeds of two and one-half to three miles per hour.

History: Some time between 2500 and 3000 B.C., yaks (Bos grunniens, meaning “grunting ox”) were domesticated on the Qinghai-Tibetan Plateauāone million square miles of vast alpine meadow and steppe land surrounded by towering mountains, a region sometimes referred to as the roof of the world. Their ancestor was the now-endangered wild yak (Bos mutus; “silent ox”), a fierce, hairy bovine standing as much as 72 inches high at the shoulder and sometimes weighing more than 2400 pounds; about 10,000 wild yaks still roam the Qinghai-Tibetan Plateau and its surrounding highlands, at altitudes of up to 13,000 feet. Domestic yaks quickly spread throughout adjacent territories from Mongolia to Nepal and beyond, though they’re most closely associated with the people of Tibet. For thousands of years nomadic herders in the high mountainous region of Central Asia depended on yaks for draft power, meat, milk, hair, and pelts; they also burned dried yak dung for fuel. Some do yet today. The export of yaks to parts of Europe and North America began in 1783 when Samuel Turner shipped two bulls from Tibet to England; more followed during the mid-nineteenth century. These were sent primarily to zoos and to research facilities in attempts to breed hardy hybrid livestock ideal for cold climate grazing. Yaks were shipped to Canada, first in 1909 and again in 1921, where they were crossed with domestic cattle and with bison. In a similar study undertaken between 1919 and 1930 at the Fairbanks Experiment Station in Alaska, yaks were crossed with domestic cattle. Both projects were ultimately unsuccessful.

Conformation: Yak cows are smaller than yak bulls or steers, standing about 54 inches tall (measured to the highest point on their humped backs) and weighing 500-800. Bulls can weigh as much as 1500 pounds. Yaks are compactly built. They have thick bodies with humped shoulders; short legs; graceful, upswept handlebar horns; and dense, woolly coats with luxurious forelocks, horse-like tails, and a skirt of long hair that nearly sweeps the ground. American yaks come in five recognized colors: black (all black with a gray nose), imperial (all black with a black nose), royal (black and white pied), golden (gold-colored), and trim (black with white markings on the head, feet, and tail). They also come in two coat types: regular and extra-woolly, with longer, thicker coats. Yaks are intelligent, inquisitive, and when handled from calfhood, friendly and easy to work with.

Special Considerations/Notes: Yaks are browsers and grazers; they thrive on brush and marginal pasture; stocking rate is roughly three yaks to one domestic beef cow. They’re slow maturing (yaks reach full growth at six or seven years of age) but are very long-lived, with a life expectancy of 25 years. Cows are attentive mothers. Due to their comparatively low birth weight (25-35 pounds), yak calves rarely need to be pulled. Domestic cattle, bison, and yaks are all members of genus Bos and they have the same number of chromosomes (60) so the three species are inter-fertile. First generation yak crossbred males are sterile but most females are fertile and can be crossed back to yaks, bison, or cattle. Cattle-yak hybrids are called yakows in North America. Due to hybrid vigor, yak-cattle crosses usually grow larger and stronger than either parent. Yaks crossed with bison produce yakalo. The International Yak Association allows for grading up to purebred status (animals of 15/16 yak background are considered purebred yaks). Yaks are domestic livestock instead of exotics, so no special permits are required to raise them. Any fencing and handling cattle that holds domestic cattle will work for yaks. Yaks are ideally suited for rearing in the Northern tier of states. Although they also thrive in mid-America, they don’t fare as well in our southernmost states, particularly the hot and humid American Southeast.