Ybor City is a district of Tampa with an eclectic history including a thriving population of wild chickens supported by its poultry-loving community. 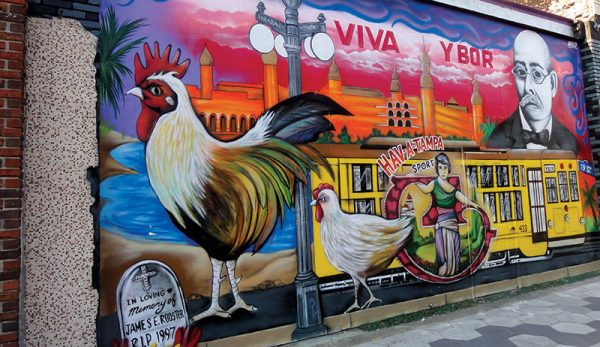 Ybor City is a historic neighborhood in Tampa, Florida. If I want to entertain out-of-town guests, I take them to Ybor (pronounced EE-bore). With nightly drag shows, plate-smashing Greek restaurants, pirate parades and Cuban cigars, Ybor is sure to please many. Another thing that makes this industrialized and entertainment city special is its famous flock of fowl.

Ybor City: From Cigars to Chickens

Vicente Martinez-Ybor, a Cuban exile and prominent cigar-maker living in Key West, founded the city in 1886. He opened its first cigar factory. The area attracted immigrant workers and quickly became known for its cigars, producing half a million a month. According to local historians and tour guides, when the workers relocated from the Florida Keys to Ybor, so did their chickens.

ãThey werenãt always roaming the streets, though,ã says Dylan Breese, founder of the Ybor Chickens Society. ãWhen vacant homes started to be razed for development, the chickens that had been happy living in the backyards were forced out and found ways to adapt and survive in the streets.ã

Breese founded the society in 2017. He has lived in Ybor for five years and was always entertained by seeing a chicken dart across the street or strut around the park. After losing his job, Breese found comfort in caring for a family of 1-day-old chicks and their mother hen.

ãI was going through a tough time, and they made me forget about it when I visited them,ã he says. ãThis little family became so important to me that I started volunteering at the organization where they lived. While there, I would see people mistreating the chickens across the street, and I recognized the need for someone to step up and offer them more protection beyond the existence of [Tampaãs Bird Sanctuary Law (Art. IV Sec. 14-176)].ã

That law, which covers all of Tampa, including Ybor, states that it is illegal to ãkill, maim or trap or otherwise molestã an avian species. There is a caveat for fowl raised for human consumption. Because backyard chickens are identified as pets and for egg production under the current code enforcement, they fall under the sanctuary ordinance. So, the same sanctuary ordinance that protects ãany domestic bird, song bird, migratory bird, wildfowl or waterfowl, except birds or fowl raised in captivity for human consumption,ã protects the chickens and bevy of peafowl that lend character to Ybor.

Today, the city is home to a flock of around 150 chickens whose ancestors have resided there for nearly 150 years. Between 40 and 50 chickens have names, with a new chicken name being introduced every Monday on the Instagram account @yborchickens. When Breese appoints a chicken a name, he likes to choose a unique yet easy-to-remember title. For example: Casper is all white, Shaq is the tallest, and Carrot is solid orange.

Although the chickens have names and many will approach Breese and other society members, the people donãt try to hold the birds. ãWe like the fact that they arenãt comfortable enough with humans to allow touching,ã Breese says. ãAs much as we might want to pick them up and give them a hug, itãs safer for them that way.ã

Joining or supporting the Ybor Chickens Society means helping to protect and preserve the chickensã rightful place in this little corner of Tampa. Donations go toward feed, equipment and medical care. Signing up with email keeps a person updated on chicken-themed city events and chicken adventures. ãWhen they have babies or get a new boyfriend/girlfriend, we let our followers know,ã Breese says.

Donating your time is another way to become involved with the society. ãWeãve had a lot of different people come to our volunteer events,ã he says. ãWe have some regulars, but we often see a new face on a random Friday or Sunday. We meet at least once a week right now to get Centennial Park ready for the Ybor City Saturday Market, which we are big fans of.ã

Portrait of an Artist

Lynn Rattrayãs introduction to the Ybor Chickens Society was the result of an online search. She was enamored with the chickens roaming Ybor City and wanted to find out more. Rattray (shown below between myself on the left and Breese on the right) is an accomplished local artist, specializing in oil and acrylic painting.ô She earned bachelorãs and master of arts degrees and is now happily retired. One day while taking reference photos in Centennial Park for her paintings, she noticed a young man walking in one of the planters where the hens hatch and raise their chicks. Concerned, she approached him.

ãYou need to get out of that planter, young man!ã she recalls yelling at Breese. ãDonãt you know there are mamas with their babies nesting in those bushes?ã Breese explained that a chick had become separated from its mother and he was reuniting them.

ãOn another photo shoot in the park, I again ran into Dylan,ã Rattray says. ãHe was sitting on the edge of a planter checking on the welfare of ãStevie,ã a sweet rooster who had recently become blind. Dylan had brought him a snack of shredded lettuce and sat with him for a while making sure he was safe.ã

Seeing the level of care for the chickens was the catalyst for her joining the society, and she began participating in the weekly Sweep ãnã Sleep park cleanups, which take place every Friday evening. ãThis organization is unequaled in its love and devotion for the welfare of Yborãs chickens and fostering goodwill with the business community,ã Rattray says. ãIts tireless efforts are contributing to the welfare of the chickens and to the sense of community in Ybor. Iãm honored to be a part of that.ã

ãThe chickens are iconic,ã says Lori Rosso, executive director of Ybor City Chamber of Commerce. ãEach one is different, in looks, temperament, and so on. They bring a whimsy to the district that has such a historical backbone.ã

ãWe can be running around and focusing on business, but you hear those little peeps from the bushes you start looking for the babies,ã Rosso says. ãOnce you see them, you canãt help but be in awe.ã She adds that for a mini city to have chickens and their chicks running around is grounding.

Many years ago Rattray was so tickled by the chicken personalities that she wrote a political satire titled The Roostercrats vs. the Ybor City Squawkers. ãI assigned each rooster in the series a political title (Secretary of Health and Fowl Services) and role in the battle for free-roaming rights, to include referencing the underground tunnels of Ybor. Eight years later, Iãm still enthralled with painting chickens.ã

Earlier this year, I joined Breese and Rattray at The Bunker for Rattrayãs art show titled ãChicken Dance ãÎ Ybor Style.ã Rattray displayed dozens of portraits each labeled with the chickenãs name. She explained to the patrons how to identify the birds based on feather pattern and personality. (See examples of her painted portraits of Ybor City’s chickens here.) Breese then took a group of 10 or so outside the restaurant for a chicken tour.

ãWhen I retired four years ago from my job as a school principal, I dreamed of days filled with painting and travel,ã Rattray says. ãWhile that partially came to pass, I could never have imagined that I would be spending my Friday evenings sweeping up after chickens in Ybor City. Iãve never owned a chicken and Ybor City is not convenient to my home, but there I am most Fridays sweeping, helping to keep the birds out of rush-hour traffic and observing as, one by one, they fly up to roost in the trees for the night. The chickens immeasurably enrich the lives of people they encounter in our community.ã

Although Breese doesnãt have favorites, he does get a kick out of the chicken named Frankenstein (pictured above right). ãIf heãs hanging around us, and we laugh at something said, heãll cluck right along with us like a parrot might,ã he says. ãHeãs also pretty clumsy and will trip, which makes us laugh more than it should.

ãOne of my favorite stories, though, is about the time I thought one of my original hens [Goldie] had died. I returned from a trip outside the country and couldnãt find her anywhere. A couple of weeks went by, and I had finally accepted it. One Sunday, I went down to visit her brothers and sisters and found Goldie surrounded by brand new hatchlings. They were my first grandkids, and it was such a relief to see her.ã

While the chickens are the primary objects of Breese and the societyãs affection, the people love the community as well. ãNot only do we want to protect them, but we want to promote harmony between them and the business and residents of Ybor City,ã he says. ãWhen we order T-shirts, have signs made or buy feed, we do so at Ybor establishments. When we gather, itãs at Ybor restaurants and bars. The chickens are one of many charming elements of this neighborhood and one that we want to make sure gets the care and respect they deserve.ã

Kenny Coogan, CPBT-KA, has a Bachelor of Science in animal behavior and is a certified bird trainer. He is a pet and garden columnist and the author of the childrenãs book A Tenrec Named Trey (2013).