Residents in this historic district of Tampa cherish and look after their wild chicken population as part of the area's old world charm. 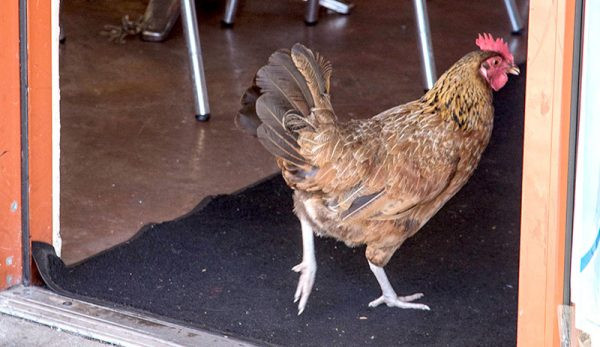 As chicken keepers, we are all familiar with the sights and sounds of roosters crowing to greet the dawn, of hens softly clucking as they forage, of sleepy birds gathering together at dusk to roost for the night.

For us, these daily happenings occur in our backyard coops, henhouses and barns. For the residents of Tampa’s historic Ybor City neighborhood, however, these antics are most often found out front, along the sidewalks and streets of this National Historic Landmark District.

Unlike our flocks, Ybor City’s fowls are footloose, freeâ€”and legally protected. It’s one of the more distinct attractions of this diverse, cultural enclave.

Ybor City Is for the Chickens

Direct descendants of the chickens owned by Ybor City’s original residents more than 100 years ago, today’s population consists of about 29 roosters ruling over a horde of hens, juveniles and chicks.

The birds roam freely through Ybor City, perching on porches, gathering on gutters and socializing at street cornersâ€”and occasionally on the streets themselves. I watched, cringing, as a rooster trailed by two brown hens paused in the middle of a residential street, bringing to a halt the cars approaching from either direction.

To my amazement, the drivers stopped and waited patiently, smiles on their faces, until the birds decided it was time to finish crossing the street. No impatient honking, no swearing and yelling out the car window.

In Ybor City, the chickens cross the road whenever they feel like it.

That is the beauty of this feral feathered flock. The vast majority of the residents here not only love the birds but also treat them as if they were cherished pets.

Many of the chickens have names, such as Ice Cream Sundae, a 2-foot-tall rooster whose colorful combination of caramel, chocolate and white feathers led to his name.

A grassroots organization, the Ybor Chickens Society, consists of local residents and businesses joining together to clean and maintain public spaces and private properties affected by the birds. They also educate the public about the poultry’s positive impact.

“They come running when they see us coming out to feed them,” Berwick explained, pointing to the homes of other neighbors who help with the feral flock. “They really come to recognize us and know us, trust us.”

A recent transplant from Virginia, Berwick specifically chose Ybor City as her new home in large part because of the birds: “Where else can I sit on the porch of my historic home, watching the beautiful sunsets and the chickens perching in the trees?”

Not everyone is in agreement, however.

In July 2018, the Tampa City Council met to deliberate over a complaint brought forth by a handful of residents concerned about a booming chicken population and the early-morning noise caused by crowing roosters.

The few dissenting voices had hoped to have the 1989 ordinance protecting the birds amended. But an overwhelming number of proponents persuaded council members to leave it unchanged.

Thus died the complaint about the Ybor City chickens.

Very much alive, however, is the iconic James E. Rooster Funeral and Procession.

Started in 1997 to commemorate James E. Rooster, who was killed by a dog, this annual New Orleans-style parade commemorates all the chickens that have sadly met their demise. Many Ybor residents attend to pay tribute to their favorite birds.

The 2019 event, held March 5, celebrated the lives of Maisie Mae, a prolific and popular bantam hen. (She was killed by a hawk the previous December while defending her babies.) The parade also honored Colonel, one of the Ybor flock’s patriarchs, murdered by an as-yet-unknown human.

My visit to Ybor unfortunately occurred one week prior to the procession. But I didn’t have to be at the celebration to experience the love Ybor citizens have for their birds.

I arrived with my friend Jerry just before sunset. The roosters were slowly herding the hens towards a tree favored by the flock as their nighttime roost.

Workers leaving for the evening waited indulgently for stragglers to cross parking lots to ensure the birds were safely away from the wheels of their motor vehicles.

A few residents, such as Berwick, sat on their porches or strolled the sidewalks, observing the chickens as they chirruped and settled amongst the branches for the evening.

It was a sunset spectacular worth safeguarding, not just for those residing and working in the district. All fortunate enough to visit and discover the sights and sounds of these feral Florida fowls enjoyed the event.