What You Need to Know About Yellow Jackets in the Fall

Navigate the wrath of yellow jackets — aggressive insects that can each sting multiple times — by understanding seasonal changes in their behavior. 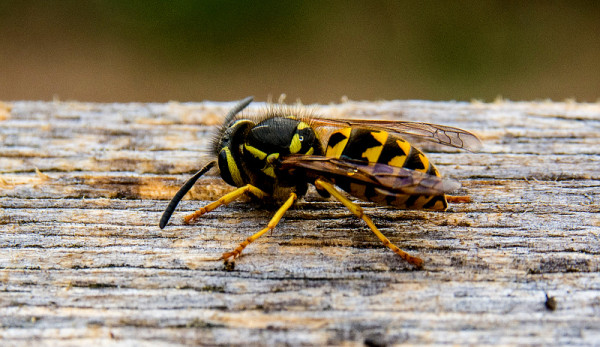 Just a few days ago, my 2-year-old daughter was helping me in the garden. It’s nearing the end of summer, so we cleared spent annual plants and pulled up some wayward weeds. She carried old plants to the compost pile when I heard her wail. I knew from the sound of her cry exactly what had happened—she had been stung by a yellow jacket.

In the fall, when we beekeepers are turning inward toward our hives and making sure they’re hunkered down for the year, all manner of pollinators are becoming more ornery and aggressive than at any other time of year. The winter rules for various stinging insects vary slightly according to their species and geographical habitat. Yellow jackets mate late in the year, and the fertilized females go in search of a place to hibernate. The workers and males will perish at the onset of winter, but the fertilized females will wait it out and lay eggs, beginning new colonies again in the spring. Yellow jackets will not reuse a nest that has been used once before, which is a blessing (as it would be quite large and established) and a bit of a curse (now the location is again unknown).

While aggressive and eager to sting, yellow jackets are not mean for the sake of being mean. Rather, they are incredibly defensive in a proactive sort of way, voraciously protecting their kin from all manner of threats, even if that threat is a mere stumbling toddler with a fist of chickweed.

In reality, yellow jackets are beneficial in their own right. They feast on rotting perishables that would otherwise spread (plant) disease. They feed their brood insects that would damage your crops and ornaments, such as aphids, caterpillars and flies. They also hunt house fly larvae. They’re not the master pollinators that honeybees are, but they’re hunters rather than gatherers. They construct elaborate underground homes filled with tunnels and based in architecture that rivals any in the natural world. The yellow jackets that you are likely to encounter in North America are a social wasp, living in family groups, just like the honeybee, and thus rather quite protective—particularly because they amass a large quantity of brood as their colonies grow, a favorite snack for predators such as skunks and bears. And with their nests at ground level, their homes make an easy target for these mammals. Unlike the honeybee, however, they can sting you multiple times—and they will.

The end of summer poses challenges to yellow jacket populations. The decline of other insect larvae means there is less in the natural world for them to hunt, so they rely on scavenging instead. Yellow jackets prefer two food groups: meat and sugar. Their larvae feeds on meat and protein sources, while sugary foods provide the energy boost the workers need to keep going.

The best course of action when navigating the great outdoors at this time of year is to be cautious of nests you’re aware of and watch yellow jacket behavior closely to locate ones you haven’t seen yet. As you’re walking, mowing or cleaning up the garden, look for consistent coming and going behavior—this might look like yellow jackets moving in both directions along an invisible “highway” in the air. Also look for small groups of yellow jackets bouncing around in the grass and milling around in the same area. I rarely advocate the killing of insects, but if you are stung near a nest, get away as quickly as possible, then eliminate the ones that have already stung you or are following you. And finally, as a preventative measure, be prepared to eliminate new nests you find in the spring so as to avoid the autumnal wrath of the infamous yellow jacket.