In this excerpt from "How to Forage Mushrooms without Dying," Frank Hyman takes a look at a favorite, flavorful fungus: Chicken of the Woods. 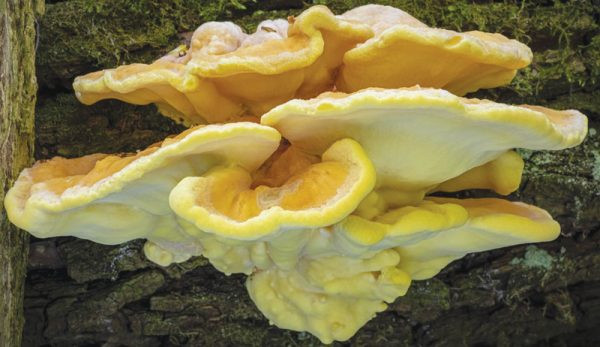 Excerpted from How to Forage for Mushrooms without DyingÂ©
by Frank Hyman. Used with permission from Storey Publishing.

You might find a Chicken of the Woods as a single shelf of a few pounds or a cluster of shelves weighing as much as 50 pounds, or anything in between. It might be growing high enough to require a ladder or on the ground at the base of the tree. The color varies but is always striking: panic orange, cadmium yellow or, less commonly, a pastel salmon color.

If youâ€™re lucky, youâ€™ll find it at its most tender: still growing and slightly dewy. In most cases, you can grab a shelf with both hands and gently wiggle it until it releases from the tree. Otherwise, cut the tender portions away from the tree (L. sulphureus) or the ground (L. cincinnatus) with a knife.Â

Iâ€™d heard many times that the mushroom called Chicken of the Woods tasted like chicken. I wanted to know the truth.

I got my answer at the Asheville Mushroom Clubâ€™s big annual weekend of forays and feasts some years ago. Someone handed me a small plate with bite-size pieces of Chicken of the Woods in a luscious tomato-cream sauce.


At the first bite I knew the truth. If someone had told me with a straight face that this was a plate of chicken, I would have swallowed that story as fast asI could fork up another bite. It had the very same taste and texture. My advice to nostalgic vegetarians? Cancel the Tofurkey and order Fungicken instead.

This is a gourmet mushroom. Rinse it under the faucet while hand-Â­shredding it into bite-size pieces. (It tears like cooked breast meat.) Serve well cooked in a soup, stew or sauce. Or let it cool and prepare as you would chicken salad. Tear it into bigger pieces if you want to grill it, slathered in marinade. Or bread it and fry it. And then invite your friends over for dinner.

The texture becomes chewy when dried and rehydrated, so sautĂ© first and then freeze. Then donâ€™t thaw it out, just cook it.

Read more: Here’s how you can grow your own shiitake mushrooms.

Can be cultivated by inoculating stumps or large logs outdoors.

There are no poisonous look-alikes on deciduous trees, but similar-looking species growing on evergreen trees (conifers and eucalyptus) may be inedible, cause gastrointestinal distress, and/or have resinous flavors.Â

Sidebar: Chicken of the WoodsÂ

This excerpt from Frank Hyman’sÂ How to Forage Mushrooms without Dying originally appeared in the September/October 2021 issue ofÂ ChickensÂ magazine.