The yew, popular in residential landscaping, is used to discourage wild animals from grazing, but in the U.S. it has killed elk, moose and bears. 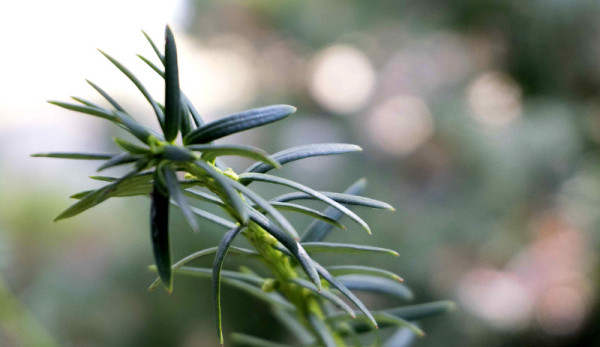 Suburban yards could be killing wildlife. Writer and naturalist Nancy Lawson shared that frightening news in an interview with the Urban Farm podcast. The fruit of the English yew (Taxus baccata) feeds songbirds in its native habitat, in Europe. Here in the United States, yews have killed hungry pronghorn, elk, moose, mule deer and bears. Ornamental plants such as English and Japanese yews are used in and around cities, suburbs and rural homes, often placed to intentionally discourage wildlife from browsing.

Wild animals might normally avoid these dangerous plants. However, as wild habitats become increasingly scarce and weather patterns become more unpredictable, animals become less selective, choosing to eat something foul-tasting over starvation. The problem stems from the plantsâ€™ newness in the landscape. Yews that have killedÂ  wildlife in Idaho and Wyoming were planted in developments built within the past 10 years, not enough time for the animals to learn and teach their young to avoid these plants.

Because I donâ€™t normally pay much attention to ornamental landscaping plants unless they are terribly invasive, I didnâ€™t know what a yew looked like. But as I researched the story and found photos, yews looked vaguely familiar. The flat-needled leaves are spiky but are soft. It slowly grows tall or, with pruning, maintains a low profile. The strong and springy branches were historically famous for making bows. As I sat in my studio, researching this plant, I had a feeling I was being watched. Just outside my window, framing the world, sits this very plant. I knew it! But I knew it by a different name, the generic name Taxus. It was next to me all along, inconspicuous, innocuous, innocent, yet very deadly.

From the beginning of my relationship with this house a few years ago, I wanted to get rid of this shrubby foundation plant. I couldnâ€™t explain why, I just didn’t like something about it. It seemed meaningless, like just filler. Why waste good soil on a plant that does little more than filter air and produce oxygen? OK, so those are good reasons to have any plant, but as Iâ€™ve learned about natural and edible landscaping, Iâ€™ve grown increasingly pickier about calling a plant â€śgood.â€ť

If everything in your system provides multiple functions, and each of those functions is backed up, then youâ€™ve got a more resilient system. Examples of redundancy, or stacking functions, live everywhere in a permaculture garden. For example, a shagbark hickory tree provides cooling as a large shade tree, food with protein-rich nuts, habitat for certain bats that sleep under the shaggy bark and structure with roots holding the soil in place, just to name a few functions of this native tree.

When I look at the front yard of my typical suburban house, it appears atypical. Itâ€™s not a simple green lawn. Wildflowers such as coneflower, goldenrod and columbine edge the sidewalk and bloom underneath dogwood, yellow wood and tulip poplar trees in various stages of maturity. Itâ€™s a beautiful little oasis in the city, except for that silly Taxus. It just doesnâ€™t fit. What are its functions?

It might function as a theft deterrent, this spiky-looking shrub that sits under the front windows. The occasional cardinal perches there to check out its reflection in the window, and sometimes chipmunks rummage underneath. The outer reaches of the Taxus branches have been trimmed and added to acid-loving blueberry bushes in the backyard. A native type of Taxus contains cancer-fighting compounds, but thatâ€™s not the plant in my front yard. So, to judge my Taxus by how many functions it can perform, it has ranked moderately OK.

I have higher standards, however. Now that I know about the deaths the yew trees have caused, a moderately OK plant that is deadly to humans and wildlife is not even close to being OK in my front yard. This Taxus will probably not harm any deer, bear, elk or moose in our city, but to think that just one cup of the leaves would cause a large mammal to have a sudden heart attack is a good enough reason to replace it. In addition, our Taxus plants cause another type of attack, an allergy attack. The male yews, which donâ€™t produce berries but do produce a powder-fine pollen, are ranked among the worst triggers of seasonal allergies and asthma. Good riddance, yew.

Itâ€™s not easy to find a native counterpart for a slow-growing evergreen shrub. Landscapers and garden suppliers continue to carry this ubiquitous foundation plant, even though some jurisdictions such as Idahoâ€™s Blaine County banned yews because of their toxicity.

My winterâ€™s work will be to kill a well-established plant and find a worthy successor for its important position in the front of the house. I envision plants that could attract and feed songbirds right outside my studio window and also provide some food for me. Thanks to this article, Iâ€™ve been thinking of highbush blueberries and cranberries. A foundation of our household is that we work with nature, not against it. The new foundation plants will represent the value we place on wildlife-friendly gardens.