The long-tailed Yokohama chicken breed is used for exhibition. 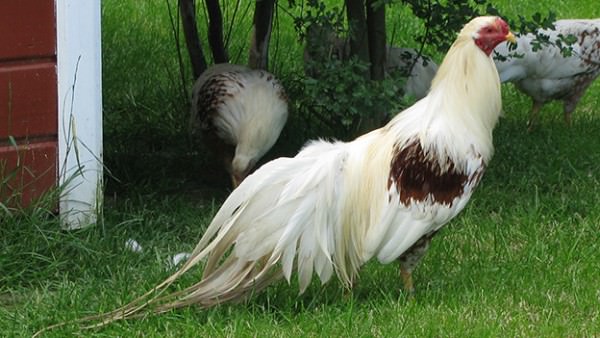 Use: The long-tailed Yokohama chicken breed is used for exhibition.

History: According to the American Livestock Breeds Conservancy, in 1864, the Jardin d’Acclimation (Acclimatization Gardens) in Paris, France, imported fabulously long-tailed Minohiki, or “Saddle Dragger,” fowl from Japan. The French renamed them Race de Yokohama after the port city from which they sailed. In 1869, a man from Dresden, Germany, imported a trio of French Yokohamas. When he and fellow German breeders were unable to acquire unrelated breeding stock from Japan, they developed today’s Yokohama by adding several other breeds to the mix, including long-tailed Phoenix fowl, a similar breed developed in Germany using Japanese stock. Two varieties, White and Red-Shouldered, entered the American Poultry Association’s Standard of Perfection in 1981.

Special Considerations/Notes: Yokohamas are docile, friendly, unusually quiet chickens that bear confinement well and make outstanding ornamental chickens in urban settings, but they require special housing to accommodate the length of their tails. They are poor layers of small, tinted eggs. The breed is globally endangered and listed as Critical on the American Livestock Breeds Conservancy’s Conservation Priority List.