You Can Pickle That!

The age-old preservation method of pickling still finds an honored place at the table. 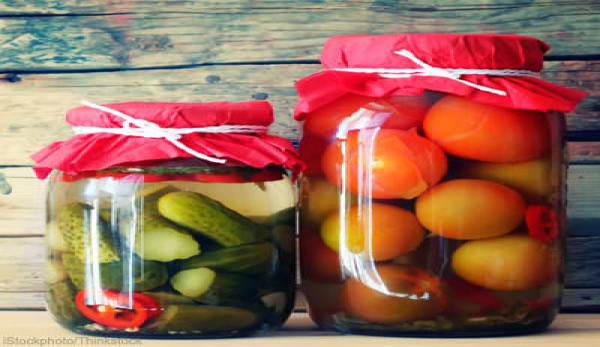 In an episode of the quirky television series, Portlandia, characters are seen in a pickling fervor, marinating everything from parking tickets to CD cases. “We can pickle that,‚ÄĚ says one character. “We can pickle anything.‚ÄĚ

While the show go to the extreme to parody our culture‚Äôs obsession with pickling, in truth, most foods can be pickled‚ÄĒbut that doesn‚Äôt mean every food should be pickled. Some are better suited to the preservation method than others.

Here are some foods that can be pickled (and a few of the more outlandish, slightly surprising foods that have been pickled over the years), along with special considerations for choosing, preserving and using a few favorites.

Ways to Pickle
Pickles have been present on the tables of historical figures from Cleopatra to Elvis. They can be sweet, sour, hot or mild, and over the years, they‚Äôve been infused with everything from dill to Kool-Aid and served fried or even dipped in chocolate.

Pickles are the punctuation point of a deli plate and have been elevated to a gastronomic art form in recent years, but the basics aren‚Äôt complicated. A simple combination of ingredients can preserve a garden full of produce or enough to fill a few jars‚ÄĒyou don‚Äôt have to think in terms of fully stocked pantry shelves of mason jars filled with pickles. You can make pickles that marinate in your refrigerator or freezer to enjoy in the short term if you‚Äôre not interested in canning quantities for long-term storage.

To get started, a little information about the basic processes can help you decide what to look for in a recipe. There are three types of pickles:

Fermented Pickles
These pickled vegetables and fruits are marinated in a salt brine for several weeks, where naturally occurring bacteria convert the vegetables‚Äô sugars into lactic acid. This preserves the pickles and creates a tangy taste. Plan on waiting about 30 days for fermentation to work its magic at room temperature. It‚Äôs generally recommended that you use canned foods, including pickles, within one year of processing. Store canned foods in a cool, dry location away from direct light.

Fresh-pack or Quick-process
Pickles For this method, fruits and vegetables, from peaches to beets, are canned in a hot vinegar solution or a sweet-and-sour syrup. While it‚Äôs best to wait three to six weeks for dill and fermented pickles, fresh-pack or quick-process pickles can be eaten right away, depending on your flavor preference. Some recipes recommend waiting three to four weeks for the flavor to infuse the produce, but it all comes down to personal preference.

Refrigerator or Freezer
Pickles These pickles are refrigerated or frozen, and don‚Äôt necessarily require large quantities of produce. All pickles generally have a mix of vinegar, water and salt, but sweet pickles have more sugar. Choosing a salt brine or sugar solution for refrigerator or freezer pickles will vary by recipe. Refrigerator pickles last up to one month in the fridge and several months in the freezer.

Ingredients for Pickling
What you infuse your produce with depends on the recipe you‚Äôre following, but typically recipes will include a combination of water, vinegar, salt, sugar, herbs and spices. While you can slightly adjust the amount of spices used in a recipe, you should not change the ratio of produce, vinegar, salt and water.

Water
Water used for pickling should be softened as minerals in hard water could interfere with curing and discolor the pickles; to soften hard water, boil it for 15 minutes then let it stand for 24 hours before using. Before use, pour water from kettle into another container, allowing sediment to remain in the bottom of the kettle. The poured-off water will be softened and will work better for pickling.

Vinegar
Vinegar should have 5-percent acetic acid content. (This will be noted on the label.) Due to the unpredictable acidity of homemade vinegars, you should not use them in pickling. You can use white vinegar or cider vinegar, depending on your recipe. While some parts of pickle recipes can be tweaked, your vinegar and salt ratio should be carefully measured using a tested recipe. Don‚Äôt dilute your vinegar or brine‚ÄĒyou‚Äôll risk spoilage or food-borne illnesses.

Salt
Salt is a critical ingredient, especially when fermenting. Use canning or pickling salt rather than table salt, which contains iodine or other anti-caking ingredients and can lead to less-than-crisp results. Measure salt carefully according to the recipe.

Sugar
White and brown sugars are the preferred¬†sweeteners for pickling, but honey can be used for pickled fruits. Honey tends to have a strong flavor, which can alter your results. Sugar substitutes aren‚Äôt recommended because they could alter the flavor or color. If you prefer sugar alternatives, use a recipe formulated specifically for them.

Spices, herbs and pickling agents
Spices, herbs and pickling agents, such as food-grade pickling lime, can be added in various combinations depending on the recipe. You can purchase pre-mixed pickling spices, which are usually a combination of mustard seed, allspice, coriander, cloves, pepper flakes, crumbled bay leaves and cinnamon sticks. Peppercorns, celery seed, curry powder, turmeric, cayenne, cardamom, star anise and ground ginger also might be included. You can generally adjust spice amounts slightly to taste, but when in doubt, check with your cooperative extension agent. Dill, mint, thyme, fennel, lemongrass, cilantro, rosemary, tarragon and a host of other herbs are also great for adding fragrance and sensory nuances to your homemade pickles.

Firming agents
Firming agents, such as pickling lime, require careful use following food-safety guidelines, but if you use fresh produce, follow a tested recipe and process for the correct amount of time, you shouldn‚Äôt need a firming agent. Many older recipes called for firming agents. By soaking and rinsing vegetables in pickling lime, you introduce calcium into the vegetable for crispness.

Pickling Equipment
The equipment you‚Äôll need depends on the type of pickle you‚Äôre making. Generally, a ceramic crock or stone jar with a cover of some sort is suitable for making fermented pickles. You‚Äôll also need:

Choose Your Food
There are hundreds of recipes in the pickle universe, limited mostly by your imagination and taste preferences. Most new picklers start with the king of pickles: the cucumber. Dilled, spiced, sweet, sour‚ÄĒcucumber pickles are the quintessential condiment. But they‚Äôre just the beginning.

Vegetables
Vegetables are at the top of the list for many picklers. A good rule of thumb for choosing vegetables is to select those that don‚Äôt wilt, such as cucumbers, beets, carrots, cabbage, green beans and other solid, sturdy vegetables. That‚Äôs not to say that you can‚Äôt pickle more delicate foods: Greens, particularly in Asian cuisine, have their place in the pickled pantry as a delicacy. You can also find pickling recipes for eggplant and other soft vegetables.

Fruits
Fruits, including apples, pears, peaches, plums, cherries, lemons, oranges, limes, cantaloupes and watermelons, can lend interest and spice to your menu throughout the year. Depending on your tastes and preferences, pickled fruits can complement savory or sweet dishes, making delicate accompaniments to meats‚ÄĒtry pickled apples or plums with pork or serve them with goat cheese and crusty French bread. When choosing fruits to pickle, select unblemished fruits that aren‚Äôt overripe.

Proteins
Proteins open up a whole new world of pickling options. Shrimp, fish, beef, pork, poultry and eggs can be fermented or pickled, as can tofu. The latter needs to be firm enough to cube before adding to the brine. If pickled meats seem outlandish, keep in mind that corned beef and sauerbraten are considered pickled beef.

While CD cases and broken lightbulbs won‚Äôt be (or at least shouldn‚Äôt be) on your list of items to pickle anytime soon, you can take confidence that most any food can be put up to eat another day‚ÄĒbe it sooner or later.

Start pickling now with one of these recipes:

About the Author: Debbie Moors is a Colorado-based freelancer, gardener and servant to her chickens. She offers a variety of pickle recipes on her blog.