A Field Guide To Silos—What They Are & How They Work

The need to preserve grain for later use is not a new idea, and the challenges that a silo addresses—rot, moisture, rodents—aren’t new either. 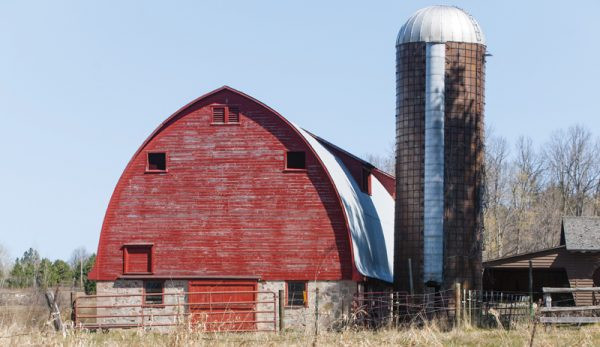 For millennia, agricultural civilizations have realized that the ability to store excess grain produced by bumper crops provides a safety buffer against lean years, or even just a long winter. The most famous ancient account of this idea is probably the biblical story in Genesis 41, in which Joseph advises Egypt to stockpile grain so that it may survive the seven years of predicted famine.

Indeed, remains of ancient Egyptian storehouses are still in existence today. The same is true of those from ancient Greece, the Middle East, and North and South America.

Silos do much more than just hold dry grain or seed. They’re also responsible for one of the more important inventions in the history of modern agriculture: silage.

Developed through experiments in the 1800s, silage is essentially a foliage crop—perhaps an entire corn stalk, perhaps an entire alfalfa plant, perhaps something else—that has been finely chopped and then stored while the moisture content is still high, somewhere near 60 percent.

Because of the moisture content, silage maintains a higher energy and protein level than dried forage (hay). This fact has made it possible for dairy farmers to keep cows in reliable milk production even during the winter.

But one caveat exists. You need a way to keep the silage from spoiling.

When farmers make hay, the key to preservation is to ensure low moisture content and to keep the hay dry. But farmers put silage up fresh, so the key to long-term silage storage involves keeping oxygen levels to a minimum.

The silo is the key to this process. In essence, silage is pickled.

Storing the silage in the low-oxygen environment of the silo encourages anaerobic microbes to ferment the forage product, but in a way that ruminants—including sheep, goats and, significantly, cattle—can still digest.

In theory, the fermentation process and the silo will protect the silage from rot. Silage is an excellent invention. Over the years, there have been a number of different solutions to the silage storage unit: the modern silo.

Let’s take a field guide approach and examine some of the modern (post-1900) silo types you might discover while exploring rural America.

Farmers experimented with silage for a few decades in the 1800s, mostly using pits or square structures constructed inside existing barns. It wasn’t until the late 1880s that John Steele, a member of the Wisconsin legislature, constructed the first round tower silo, dubbed the “Steele Silo.”

Agricultural scientist Franklin Hiram King of the Wisconsin Experimental Station furthered the innovation with his “King Silo” in 1891.

The round tower silo is what most people have in mind when they think of a silo. Like lighthouses dotting a shoreline, tower silos have something of a charming appeal.

Even people who don’t know their use instantly recognize them. Plus, they’re iconic symbols of country life.

Round silos are beneficial for several reasons. For one thing, a circle is strong, especially when reinforced by steel bands the way most silos are.

All the weight of the grain in the silo (think of it as a form of pressure) pushes outward on the sides and tries to spill in all directions. A circle helps to prevent that. Also, the contents of early square silos suffered from extensive spoilage in the corners.

But round tower silos aren’t without their downsides. The very fermentation process that preserves silage can create gases that are unhealthy and hazardous to humans.

Some silos, particularly glass/steel silos, are very effective at keeping oxygen levels to a minimum. This can present a danger to anyone entering the silo for maintenance or inspection. Silage can also be a fire danger.

But this hasn’t prevented tower silos from achieving widespread use.

You can fins tower silos built using many different construction methods, some of which went in and out of style over the years.

Read more: Here are 4 ways to use silage tarps in vegetable production.

Wood silos were popular up until around 1900, when they began to be replaced by other materials that were more resistant to deterioration from silage seepage.

Sometimes, they’re more octagonal or polygon-shaped than round. That’s likely because such shapes are easier to construct out of wood.

The wooden silos that still exist look quite beautiful and interesting—fascinating pieces of a moment in rural history that quickly disappeared.

You might also see vintage silos of masonry construction, such as stone or brick. Some of these are quite attractive and unique.

These are often historical in nature, constructed during the experimental age of silos, when farmers sought alternatives to wood, but before concrete and glass/steel silos became the norm.

The cost of constructing a stone or brick silo was influenced by the need to hire masons for the work. But if the region was rich in stones, the material was readily available.

Concrete was soon found to be an excellent construction material. And many classic tower silos are constructed of concrete walls with metal roofs. You’ll discover a few subvarieties here:

Read more: Here are 4 reasons you need farm insurance for your hobby farm.

Starting around the 1950s, silos constructed of glass-lined steel plates increased in popularity. Steel sheets bolted together and effectively encased in porcelain comprise the walls.

Silage is loaded into these distinctive silos from the top and removed from below by use of an unloader. Glass silos like these are known as low-oxygen silos, since they are very well sealed and contain plastic air bladders to further protect the silage from oxygen exposure.

The bladders allow the air pressure inside the silo to match that of the outdoors.

While still in use on some farms, glass silos haven’t maintained their former popularity, due possibly to competition from bunker silos. Also, the unloading mechanisms prove difficult and expensive to repair.

The square silo design predates the round tower silo. But, as noted, the design led to spoilage in the corners.

Eventually, farmers abandoned the concept of the square silo design. Today’s farmers, however, find merit in square silos once again.

These silos can contain different compartments, allowing storage of more than one product in the same silo. Also, they assemble much easier.

As iconic as tower silos have been for the last 100-plus years, and as useful as they may be for housing silage, times do change. And with them, technology changes, too.

Today—in a kind of return to the past—horizontal silos take the place of tower silos, especially for large agricultural operations.

While perhaps lacking the pastoral charm of a majestic tower silo, horizontal silos have proven their worth time and again in recent years for their functionality and effectiveness at storing large amounts of silage and keeping it safe.

Horizontal silos are also faster to unload—a critical factor that makes them more desirable on many of today’s farms.

Silage bunkers typically have two long, parallel concrete or wooden walls. You could find crops packed in and then sealed with plastic along a third wall on one end.

In an effort to squeeze additional oxygen out of the crop, farmers utilize large-wheeled tractors to drive back and forth across the silage bunkers during and after the filling process to help press oxygen out of the forage. Once filled, large plastic sheeting covers the bunker to seal against the air as much as possible.

Finally, the plastic is weighed down, often with tire walls, but occasionally by other means such as sandbags. This weight functions to secure the plastic from wind and applies pressure to the silage, forcing out additional oxygen.

Properly loading and maintaining a silage bunker requires quite a bit of skill and research. Massive amounts of spoilage and dangerous avalanching of the silage can occur if incorrect procedures are used. But when constructed and filled properly, these structures allow safe storage—and faster removal for feeding—of huge quantities of feed.

It’s no wonder they’re so popular in larger agricultural settings.

Trench silos utilize essentially the same concept, except the bunker is dug into the ground instead of using walls built on top of it.

Read more: A hay moisture tester can help with storing your hay bales.

Another option similar to the silage bunker is a silage pile, sometimes known as a drive-over pile. This is sometimes used as backup solution during a bumper crop, when there is an excess of silage that won’t fit in the silo or bunker.

Some farms even use silage piles as primary silage storage. They provide permanent housing for the crop using nothing but a large concrete slab and adequate plastic covering.

As with silage bunkers, the pile is compressed by large-wheeled tractors in order to aid in oxygen removal. But without the concrete walls of a bunker, it’s more challenging to achieve the proper amount of compression.

Again, people often use tire walls to pin down the plastic covering.

It’s always nice to see vintage farm buildings restored. And if you own property with an older silo, you may be considering restoration.

But with silos, you must remember to take extra care and caution—preferably with the help of a silo expert. This is especially true if the silo is intended to be put back into use.

But even if the goal is simply to stabilize the structure, be sure to get an inspection and advice on any cracks, foundational issues, and corrosion that may have formed from years and years of silage acid on metal supports.

Restoration companies may fix leaning silos, apply acid-resistant coating, and do whatever else it takes to make the structure safe and functional again.