You’re Using That Shovel All Wrong

Shovels are about this simplest tool in the shed, right? You’d be surprised how many people use them wrong. 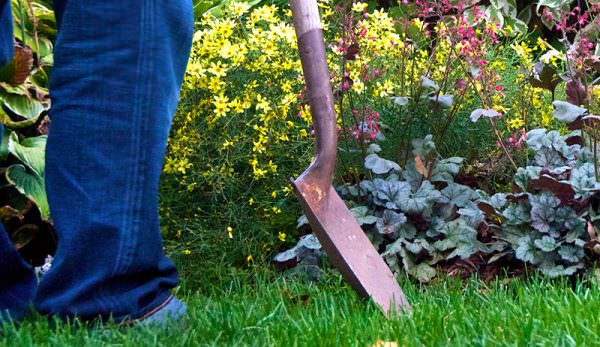 Everyone thinks they know how to use a shovel correctly, but I’m not so sure. I have supervised a lot of volunteer garden groups and frequently find myself leading impromptu shovel-training courses. Here are three classic mistakes I see.

1. Reaching For The Wrong Size

Often I’ll see tall guys grab the short shovels with D-shaped handles. The problem here is that they’ll be bending over deeply to dig and getting tired quickly. Plus, if their stomach and upper leg muscles aren’t developed well enough, they could seriously hurt their backs.

When choosing a shove, you want one with a long handle that reaches about as high as your chest or nearly to your shoulders. A shovel is really just a lever, and the longer and more comfortable the reach of your end of the lever, the more soil you’ll move with less effort.

Short, D-handle shovels were never designed to be garden tools. They were originally English miners’ shovels, and they needed to be short because miners worked in tight quarters. Because they were abundant and cheap, they became a common (though not optimal) garden tool in England and its colonies.

The short length makes these miners’ shovels more appropriate for women to use due to their generally shorter height, more modest upper-body strength and lower center of gravity. But even so, this tool isn’t optimal for women, either: Their best bet is to pick out well-designed tools that are specifically made for women, such as the HerShovel from Green Heron Tools.

The second mistake I see is people digging their hole in the wrong direction. By wrong direction, I mean they dig out the first dollop and then mistakenly step forward to dig the second one.

Your digging will be less laborious if your first shovelful is dug from the part of the soon-to-be-hole that is farthest from you. Then take a half-step backward and dig the second dollop right next to the previous one, but a bit closer to you. This way, when you tilt the shovel handle back, the blade of the shovel will lift the soil and rise up into the void created by the first shovelful. Plus, by moving backward, the undisturbed soil behind the blade will make a better surface on which the fulcrum of your shovel/lever can pivot. Whether you’re digging a hole or turning over a vegetable bed, working your way backward will save you lots of time and effort.

Round-point shovels and square-point shovels are made for different types of work. Because the square-point shovel has a bigger surface area, I’ve seen gardeners grab them, thinking they will get more work done. But that’s only true if they are scooping dirt or gravel from a loose pile. (When scooping mulch, a pitchfork is better.) A square-point is also better for smoothing off a flat area for a path or removing a layer of sod.

With these tips in mind, perhaps the next time you pick up a shovel, your work will be more efficient and less back-breaking.