Courtesy Liz Palika Zenyatta stops to hear the crowd roar. Urban farmers may have less land to work with than rural farmers and may spend their days listening to car horns honking instead of birds singing in the trees, but we have one advantage over our country brethren: We have access to a lot of […] 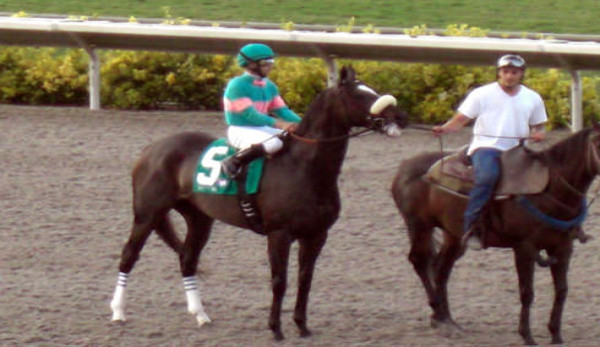 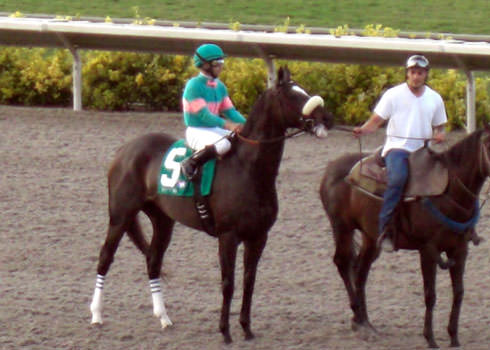 Urban farmers may have less land to work with than rural farmers and may spend their days listening to car horns honking instead of birds singing in the trees, but we have one advantage over our country brethren: We have access to a lot of cool stuff.Â

This reality was brought home to me this weekend when I had the chance to see one of the greatest horses of all time live and in the flesh. Her name is Zenyatta, and she blew me away.

Thanks to my friend Gina Spadafori, book author, Pet Connection blogger and Sacramento urban farmer extraordinaire (read about her new chicken coop), Randy and I were treated to box seats at the stretch run at the picturesque Del Mar Thoroughbred Club, just north of San Diego. The goal was to see Zenyatta in the 9th race. Sheâ€™s famous among racing fans because she has never lost a race. And she runs against boys, too.

Being a horse lover, I couldnâ€™t pass up the opportunity. I had heard of Zenyatta, but didnâ€™t know much about her. As a kid, I was a huge racing fan and had the privilege of seeing the great Secretariat win the Triple Crown on TV. But over the years, my interest in the sport waned because I began to question the way racehorses were treated. I continued to watch the Triple Crown races on TV every year until I saw Barbaro break his leg in the Preakness. After that, I was literally afraid to watch the races.

But I couldnâ€™t pass up this opportunity to see my fellow urban farmer Gina and spend a day outside at a beautiful racetrack. And I figured it might be cool to see this famous racehorse I kept hearing so much about. I had no idea I would be moved nearly to tears when I saw her.

Turns out Zenyatta is no ordinary horse. My first glimpse of her was on the big screen in the infield as the camera followed her through the paddock. This is where she began to do her famous strut, something I hadnâ€™t heard about before. Seems on her own, she one day started to do a Spanish walk, a move usually reserved for showy Andalusians in breed exhibitions. Now itâ€™s a habit and a something Zenyatta does before every race. Wow!

Zenyatta then came onto the track as she and the small field of horses that dared to challenge her made their way to the starting gate. Unlike most racehorses, who prance nervously to the gate in anticipation of what is to come, Zenyatta walked proudly, head up, ears pricked. I noticed right away she had a different air to her than the other horses, but when she suddenly stopped, looked at the crowd and listened with ears cocked as the crowd roared in adulation. I knew this was a very special horse.

She did this a few times on her way to the gate, deliberately sending the crowd into a tizzy every time. There is no doubt in my mind that this mare knew these thousands of people were here to see her, and she loved it.

The race itself was typical for Zenyatta. She had been brought out of retirement by her owners just so we could see her win her 18th race out of 18 starts. She came from behind in the stretch and flew past the other horses, her ears pricked, her head higher than all the other horses.

Although I sometimes lament that I donâ€™t live out in the country where the air is fresh and the pace is slow, this was one day I was happy to be an urbanite. If didnâ€™t live among the throngs, I would not have had such easy access to the amazing Zenyatta.